The Complex Birth of Binary Stars captured for the first time

The Complex Birth of Binary Stars captured for the first time 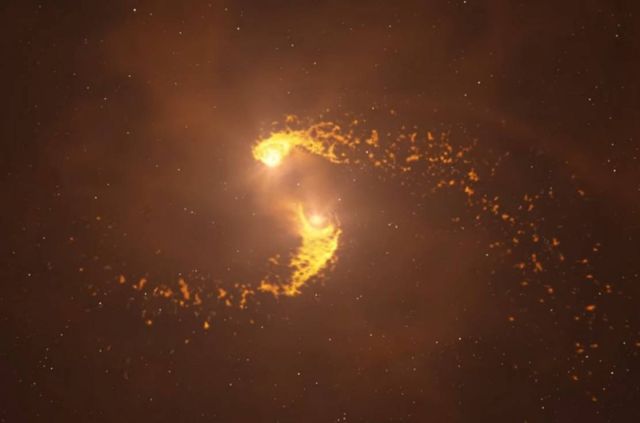 High-resolution images of a young stellar binary system revealed for the first time.

Astronomers captured the birth of binary stars, a complex network of accretion filaments nurturing two proto-stars at the centre of the circum-binary disk. With these observations, an international team of astronomers led by the Max Planck Institute for Extraterrestrial Physics was able to identify a two-level accretion process, circum-binary disk to circumstellar disk to stars, constraining the conditions leading to the formation and evolution of binary star systems.

The Atacama Large Millimeter/submillimeter Array (ALMA) captured an unprecedented image of two circumstellar disks, in which baby stars are growing, feeding with material from their surrounding birth disk. These observations shed new light on the earliest phases of the lives of stars and help astronomers determine the conditions in which binary stars are born.

This artistic animation shows two circumstellar disk orbiting each other and accreting gas and dust for their surrounding cloud. 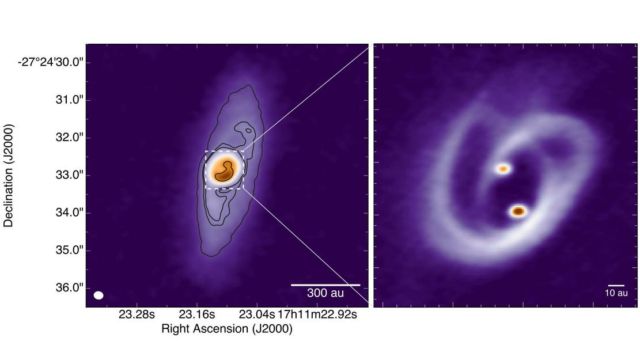 A zoom into the circum-binary disk of [BHB2007] 11 observed with ALMA. The proto-binary system is surrounded by dust…  © MPE

“We see two compact sources, that we interpret as circum-stellar disks around the two young stars,” explains Felipe Alves from MPE, who led the study. “The size of each of these disks is similar to the asteroid belt in our Solar System and their separation is 28 times the distance between the Sun and the Earth.” Both proto-stars are surrounded by a circum-binary disk with a total mass of about 80 Jupiter masses, which contains a complex network of dust structures distributed in spiral shapes. The shape of the filaments suggests streamers of in-falling material, which is confirmed by the observation of molecular emission lines.

“This is a really important result,” stresses Paola Caselli, director and MPE and head of the Centre of Astrochemical Studies. “We have finally imaged the complex structure of young binary stars, with their “feeding filaments” connecting them to the circum-binary disk. This provides important constraints for current models of star formation.”