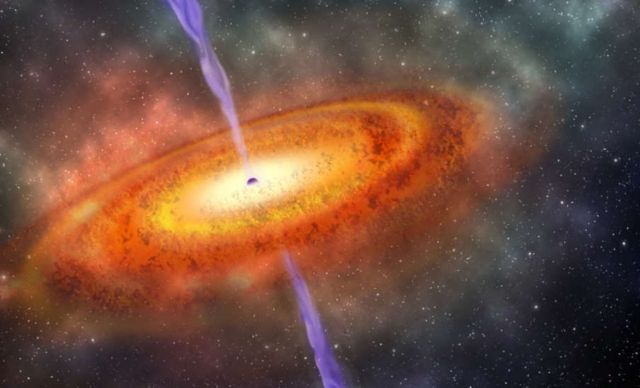 Above, illustration by Robin Dienel, courtesy of Carnegie Institution for Science.

The light from this black hole, that lies in a quasar, has been traveling to us for more than 13 billion years.

“Gathering all this mass in fewer than 690 million years is an enormous challenge for theories of supermassive black hole growth.”

Quasars are tremendously bright objects comprised of enormous black holes accreting matter at the centers of massive galaxies. This newly discovered black hole has a mass that is 800 million times the mass of our Sun.

To grow black holes that big so soon after the Big Bang, astronomers have speculated that the very early universe might have had conditions allowing the creation of very large black holes with masses reaching 100,000 times the mass of the Sun. This is very unlike the black holes that form in the present-day universe, which rarely exceed a few dozen solar masses.

The Bañados quasar is especially interesting, because it is from the time known as the epoch of reionization, when the universe emerged from its dark ages.