The Space Telescope that will scan the skies for Dangerous Asteroids

Home/Posts/Astronomy, Space/The Space Telescope that will scan the skies for Dangerous Asteroids
Previous Next

The Space Telescope that will scan the skies for Dangerous Asteroids 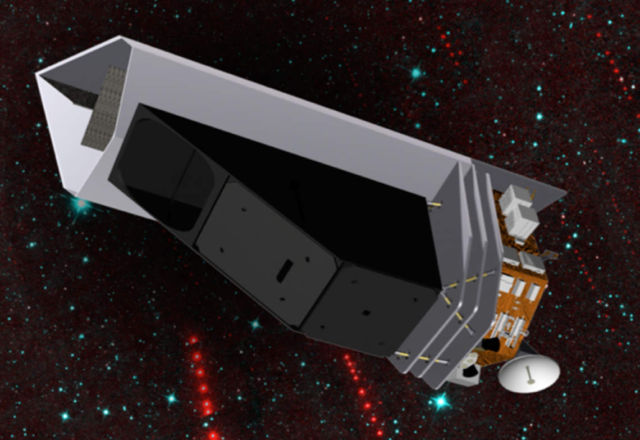 NASA has assigned UArizona to lead mission for a Space Telescope that will scan the skies, for dangerous Near-Earth Asteroids.

NASA has tasked Amy Mainzer, an expert in infrared astronomy at the University of Arizona, with leading NEO Surveyor, a mission to find, track and characterize yet unseen asteroids and comets that may pose a threat to Earth.

The NEO Surveyor infrared space telescope is optimized for finding, tracking and characterizing potentially hazardous asteroids and comets. The spacecraft’s sunshade (silver vertical part) blocks out sunlight and keeps the telescope shielded so that it can search for the faint heat signatures from Earth-approaching objects. The asteroids will appear as strings of dots (color-coded red in the background image) that will stand out against the background stars (color-coded blue).

A new mission to find, track and characterize asteroids and comets that may pose a threat to Earth has moved one step closer to launch. Led by Amy Mainzer, a professor in the University of Arizona’s Lunar and Planetary Laboratory, the Near-Earth Object Surveyor mission has been approved by NASA to begin its preliminary design phase.

NEO Surveyor is an infrared space telescope designed to help advance NASA’s planetary defense efforts by expediting our ability to discover and characterize most of the potentially hazardous asteroids and comets that come within 30 million miles of Earth’s orbit. These asteroids and comets are collectively known as near-earth objects, or NEOs.

“The fact that NASA tasked Dr. Mainzer and her group with the scientific leadership of this mission is a direct testament to her incredible leadership and expertise, as well as our university’s strong foundation in infrared astronomy, led by Marcia and George Rieke at Steward Observatory, and our strengths in asteroid science, as with the OSIRIS-REx sample return mission,” said University of Arizona President Robert C. Robbins. “With NEO Surveyor, we are embarking on a project that transcends basic research and directly tackles one of humankind’s grand challenges: keeping our planet safe from devastating asteroid impacts.”