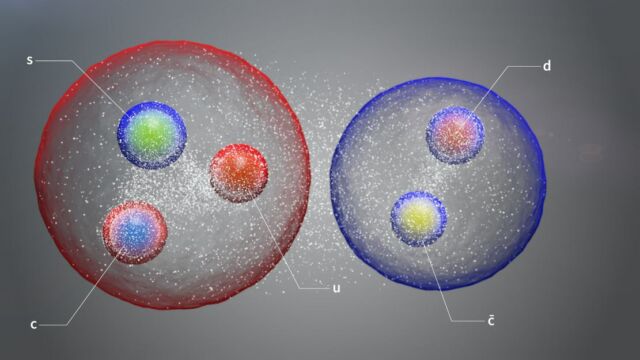 The international LHCb collaboration at the Large Hadron Collider (LHC) has observed three never-before-seen particles: a new kind of “pentaquark” and the first-ever pair of “tetraquarks”, which includes a new type of tetraquark. The findings, presented today at a CERN seminar, add three new exotic members to the growing list of new hadrons found at the LHC. They will help physicists better understand how quarks bind together into these composite particles.

Image: The new pentaquark, illustrated here as a pair of standard hadrons loosely bound in a molecule-like structure, is made up of a charm quark and a charm antiquark and an up, a down and a strange quark.  Credit CERN

Quarks are elementary particles and come in six flavours: up, down, charm, strange, top and bottom. They usually combine together in groups of twos and threes to form hadrons such as the protons and neutrons that make up atomic nuclei. More rarely, however, they can also combine into four-quark and five-quark particles, or “tetraquarks” and “pentaquarks”. These exotic hadrons were predicted by theorists at the same time as conventional hadrons, about six decades ago, but only relatively recently, in the past 20 years, have they been observed by LHCb and other experiments.

The discoveries announced by the LHCb collaboration include new kinds of exotic hadrons. The first kind, observed in an analysis of “decays” of negatively charged B mesons, is a pentaquark made up of a charm quark and a charm antiquark and an up, a down and a strange quark. It is the first pentaquark found to contain a strange quark. The finding has a whopping statistical significance of 15 standard deviations, far beyond the 5 standard deviations that are required to claim the observation of a particle in particle physics.