Using Drone to Herd Birds Away from Airports

Using Drone to Herd Birds Away from Airports 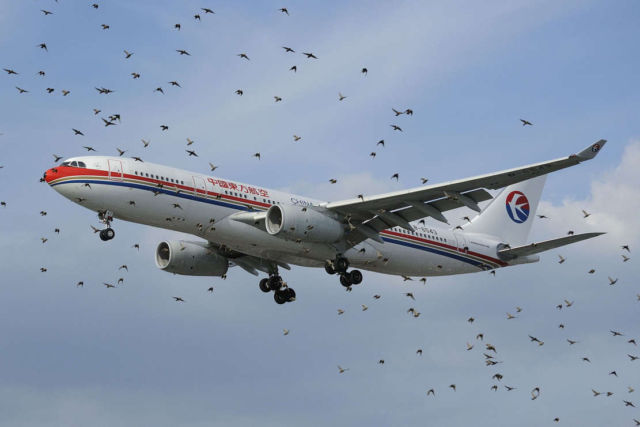 Thanks to a new algorithm a single drone can autonomously to herd birds away from Airports.

Engineers at Caltech have developed a new control algorithm that enables just a drone to herd an entire flock of birds away from the airspace of an airport.

The algorithm is presented in a study in IEEE Transactions on Robotics.

Above, an Airbus A330 of China Eastern behind a flock of birds at London Heathrow.  Credit wikimedia

The project was inspired by the 2009 “Miracle on the Hudson,” when US Airways Flight 1549 struck a flock of geese shortly after takeoff and pilots Chesley Sullenberger and Jeffrey Skiles were forced to land in the Hudson River off Manhattan.

Soon-Jo Chung, an associate professor of aerospace and Bren Scholar in the Division of Engineering and Applied Science, said:

“The passengers on Flight 1549 were only saved because the pilots were so skilled. It made me think that next time might not have such a happy ending. So I started looking into ways to protect airspace from birds by leveraging my research areas in autonomy and robotics.”