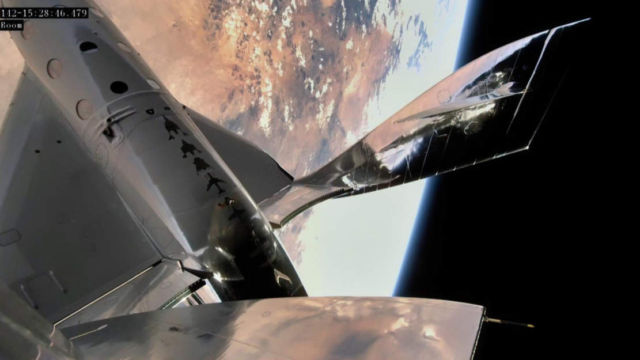 VSS Unity achieved a speed of Mach 3 after being released from the mothership, VMS Eve, and reached space, at an altitude of 55.45 miles before gliding smoothly to a runway landing at Spaceport America.

On VSS Unity’s flight deck were CJ Sturckow and Dave Mackay, while Kelly Latimer and Michael Masucci piloted VMS Eve. CJ, who flew as pilot-in-command, becomes the first person ever to have flown to space from three different states. The crew experienced extraordinary views of the bright, blue-rimmed curvature of the earth against the blackness of space. New Mexico’s White Sands National Park sparkled brilliantly below. Their experience today gives Virgin Galactic’s Future Astronaut customers a glimpse of what lies ahead.

“Today’s flight showcased the inherent elegance and safety of our spaceflight system, while marking a major step forward for both Virgin Galactic and human spaceflight in New Mexico. Space travel is a bold and adventurous endeavor, and I am incredibly proud of our talented team for making the dream of private space travel a reality. We will immediately begin processing the data gained from this successful test flight, and we look forward to sharing news on our next planned milestone.”