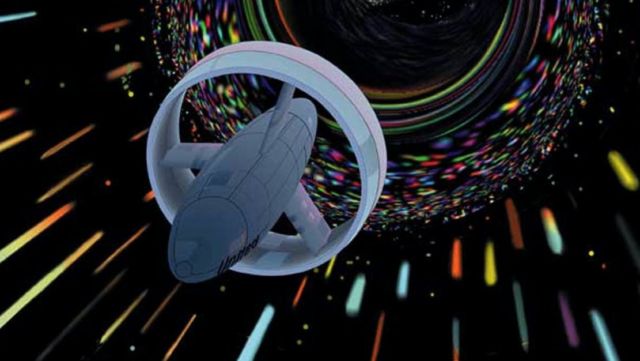 If humanity ever wants to travel easily between stars, people will need to go faster than light. But so far, faster-than-light travel is possible only in science fiction.

The closest star to Earth is Proxima Centauri. It is about 4.25 light-years away, or about 25 trillion miles (40 trillion km). The fastest ever spacecraft, the now- in-space Parker Solar Probe will reach a top speed of 450,000 mph. It would take just 20 seconds to go from Los Angeles to New York City at that speed, but it would take the solar probe about 6,633 years to reach Earth’s nearest neighboring solar system.

In Issac Asimov’s Foundation series, humanity can travel from planet to planet, star to star or across the universe using jump drives. As a kid, I read as many of those stories as I could get my hands on. I am now a theoretical physicist and study nanotechnology, but I am still fascinated by the ways humanity could one day travel in space.

Some characters – like the astronauts in the movies “Interstellar” and “Thor” – use wormholes to travel between solar systems in seconds. Another approach – familiar to “Star Trek” fans – is warp drive technology.

Warp drives are theoretically possible if still far-fetched technology. Two recent papers made headlines in March when researchers claimed to have overcome one of the many challenges that stand between the theory of warp drives and reality.

But how do these theoretical warp drives really work? And will humans be making the jump to warp speed anytime soon?

Physicists’ current understanding of spacetime comes from Albert Einstein’s theory of General Relativity. General Relativity states that space and time are fused and that nothing can travel faster than the speed of light. General relativity also describes how mass and energy warp spacetime – hefty objects like stars and black holes curve spacetime around them. This curvature is what you feel as gravity and why many spacefaring heroes worry about “getting stuck in” or “falling into” a gravity well. Early science fiction writers John Campbell and Asimov saw this warping as a way to skirt the speed limit.

What if a starship could compress space in front of it while expanding spacetime behind it? “Star Trek” took this idea and named it the warp drive.

In 1994, Miguel Alcubierre, a Mexican theoretical physicist, showed that compressing spacetime in front of the spaceship while expanding it behind was mathematically possible within the laws of General Relativity. So, what does that mean? Imagine the distance between two points is 10 meters (33 feet). If you are standing at point A and can travel one meter per second, it would take 10 seconds to get to point B. However, let’s say you could somehow compress the space between you and point B so that the interval is now just one meter. Then, moving through spacetime at your maximum speed of one meter per second, you would be able to reach point B in about one second. In theory, this approach does not contradict the laws of relativity since you are not moving faster than light in the space around you. Alcubierre showed that the warp drive from “Star Trek” was in fact theoretically possible.

But for a warp drive to generate enough negative energy, you would need a lot of matter. Alcubierre estimated that a warp drive with a 100-meter bubble would require the mass of the entire visible universe.

In 1999, physicist Chris Van Den Broeck showed that expanding the volume inside the bubble but keeping the surface area constant would reduce the energy requirements significantly, to just about the mass of the sun. A significant improvement, but still far beyond all practical possibilities.

Two recent papers – one by Alexey Bobrick and Gianni Martire and another by Erik Lentz – provide solutions that seem to bring warp drives closer to reality.

Bobrick and Martire realized that by modifying spacetime within the bubble in a certain way, they could remove the need to use negative energy. This solution, though, does not produce a warp drive that can go faster than light.

Independently, Lentz also proposed a solution that does not require negative energy. He used a different geometric approach to solve the equations of General Relativity, and by doing so, he found that a warp drive wouldn’t need to use negative energy. Lentz’s solution would allow the bubble to travel faster than the speed of light.

It is essential to point out that these exciting developments are mathematical models. As a physicist, I won’t fully trust models until we have experimental proof. Yet, the science of warp drives is coming into view. As a science fiction fan, I welcome all this innovative thinking. In the words of Captain Picard, things are only impossible until they are not.