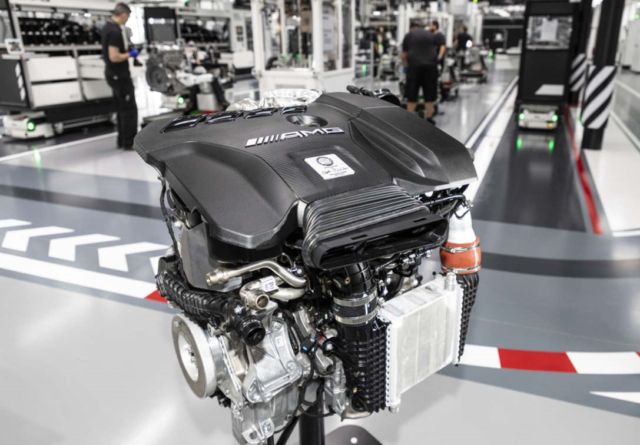 The new Mercedes-AMG four-cylinder turbo engine with 416 hp, is the world’s most powerful four-cylinder engine in series production.

The completely newly developed Mercedes-AMG 2.0-liter M 139 engine, with an output of up to 416 hp, is the world’s most powerful turbocharged four-cylinder engine in series production. With this engine, Mercedes-AMG has even exceeded the previously most powerful M 133 engine by 40 hp. Maximum torque has also increased from 350 to up to 369 lb-ft. With an output per liter of up 208 hp, the new Mercedes-AMG high-performance turbo engine even ranks ahead of many well-known supercar engines. The new, highly efficient engine is produced on an innovative production line in Affalterbach, on the “One Man, One Engine” principle.

The four-cylinder engine is available in two output versions for the compact models of Mercedes-AMG: with 416 hp for the S-model and 382 hp in the base version. This product policy logic has already proved successful in the V8- powered AMG Performance models, and more closely meets customer wishes.

Apart from its performance figures, the new engine impresses with its immediate response. To this end, the torque curve was carefully balanced with “torque shaping”: The peak torque of 369 lb-ft (354 lb-ft for the base version) is available in a range of 5000-5250 rpm (4750-5000 rpm in the base version).

With this configuration, the AMG engineers have achieved a power delivery similar to that of a naturally aspirated engine for an even more emotional driving experience. The engine developers were also able to realize a dynamically increasing torque curve in the lower engine speed range, thereby improving agility. The increasing torque at higher rpm makes the engine more free revving. Moreover, the high maximum engine speed (up to 7200 rpm) confirms the M 139 as a sports engine.

“We already set the benchmark in the segment with the preceding engine. This fundamentally new four-cylinder presented us with the challenge of doing even better. And we succeeded with a number of sometimes revolutionary solutions. With the M 139, we have once again impressively demonstrated the engine expertise of Mercedes-AMG. Not only is the output per liter unrivalled for a turbocharged engine, the high level of efficiency also demonstrates that the internal combustion engine still has further potential,” says Tobias Moers, Chairman of Mercedes-AMG GmbH.