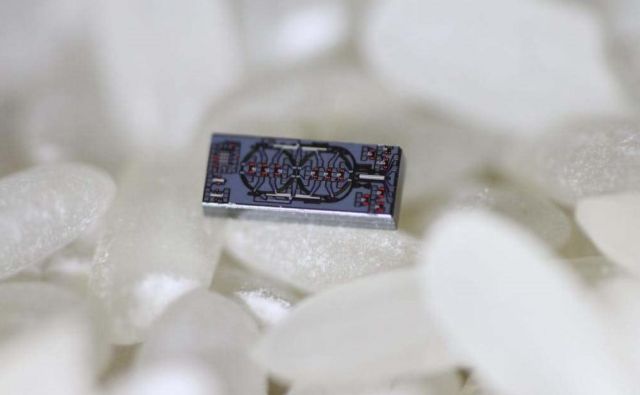 The new optical gyroscope—shown above with grains of rice—is 500 times smaller than the current state-of-the-art device.   Credit Ali Hajimiri

Gyroscopes are devices that help vehicles, drones, and wearable and handheld electronic devices know their orientation in three-dimensional space. They are commonplace in just about every bit of technology we rely on every day. Originally, gyroscopes were sets of nested wheels, each spinning on a different axis. But open up a cell phone today, and you will find a microelectromechanical sensor (MEMS), the modern-day equivalent, which measures changes in the forces acting on two identical masses that are oscillating and moving in opposite directions. These MEMS gyroscopes are limited in their sensitivity, so optical gyroscopes have been developed to perform the same function but with no moving parts and a greater degree of accuracy using a phenomenon called the Sagnac effect.