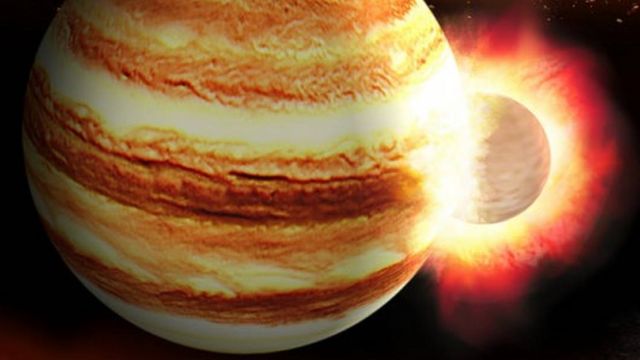 Scientists find out that young Jupiter was smacked head-on by massive newborn planet.

A colossal, head-on collision between Jupiter and a still-forming planet in the early solar system, about 4.5 billion years ago, could explain surprising readings from NASA’s Juno spacecraft.

“This is puzzling,” said Rice astronomer and study co-author Andrea Isella. “It suggests that something happened that stirred up the core, and that’s where the giant impact comes into play.”

Isella said leading theories of planet formation suggest Jupiter began as a dense, rocky or icy planet that later gathered its thick atmosphere from the primordial disk of gas and dust that birthed our sun.

Isella said he was skeptical when study lead author Shang-Fei Liu first suggested the idea that the data could be explained by a giant impact that stirred Jupiter’s core, mixing the dense contents of its core with less dense layers above. Liu, a former postdoctoral researcher in Isella’s group, is now a member of the faculty at Sun Yat-sen in Zhuhai, China.

“It sounded very unlikely to me,” Isella recalled, “like a one-in-a-trillion probability. But Shang-Fei convinced me, by shear calculation, that this was not so improbable.”

A rendering shows the effect of a major impact on the core of a young Jupiter, as suggested by scientists at Rice and Sun Yat-sen universities. They say the collision about 4.5 billion years ago could explain surprising readings from NASA’s Juno spacecraft.  Illustration by Shang-Fei Liu/Sun Yat-sen University

The research team ran thousands of computer simulations and found that a fast-growing Jupiter can have perturbed the orbits of nearby “planetary embryos,” protoplanets that were in the early stages of planet formation.

The study published in the journal Nature.