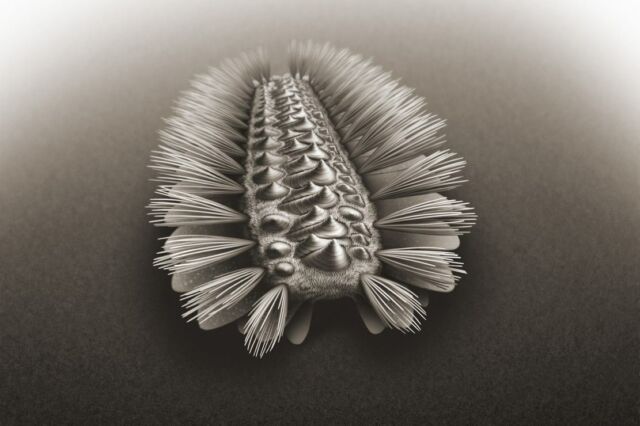 Discovered by an international team of scientists, including from the Universities of Bristol and Oxford, and the Natural History Museum, measuring half-an-inch long, the fossil worm – named Wufengella and unearthed in China, was a stubby creature covered in a dense, regularly overlapping array of plates on its back, belonging to an extinct group of shelly organisms called tommotiids.

Above: A reconstruction of how Wufengella would have looked like in life. Illustration made by Roberts Nicholls, paleocreations.com

Surrounding the asymmetrical armour was a fleshy body with a series of flattened lobes projecting from the sides. Bundles of bristles emerged from the body in between the lobes and the armour. The many lobes, bundles of bristles and array of shells on the back are evidence that the worm was originally serialised or segmented, like an earthworm. 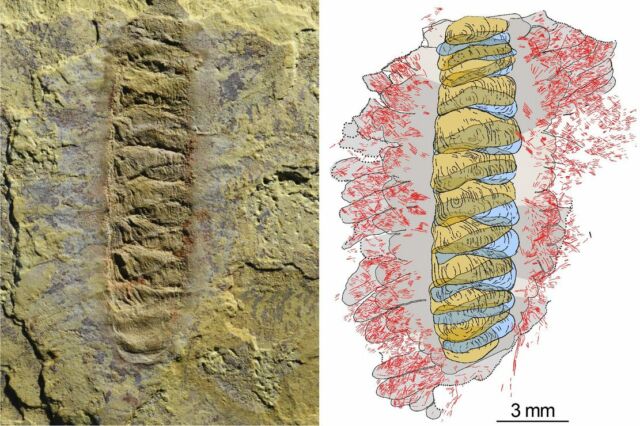 The fossil Wufengella and a drawing outlining the major components of the organism. Credit Jakob Vinther and Luke Parry

The findings are reported today in the journal Current Biology. Study co-author, Dr Jakob Vinther from the University of Bristol’s School of Earth Sciences, said: “It looks like the unlikely offspring between a bristle worm and a chiton mollusc. Interestingly, it belongs to neither of those groups.”