Home/Posts/SCIENCES/Physics/A bizarre Form of Ice Grows at 1,000 mph
Previous Next 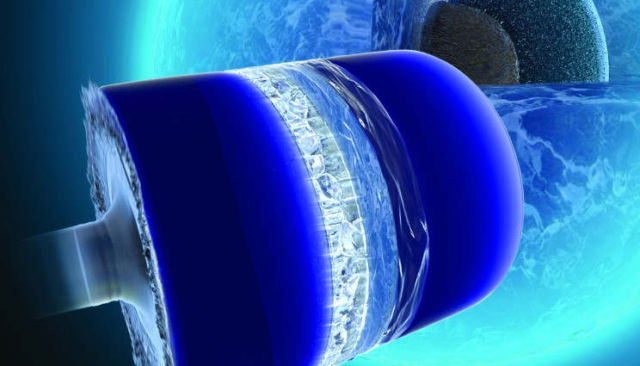 Ice VII exotic form of ice, can grow so rapidly, that in right conditions, could freeze an ocean-world in just a few hours.

A team of theorists from Lawrence Livermore National Laboratory (LLNL) has solved a long-standing puzzle in the nucleation of a high-pressure phase of ice known as ice VII (or “ice-seven”), which is believed to exist near the core of “ocean world” planets recently detected outside of the solar system, and has recently been discovered to exist within the Earth’s mantle.

Water has been found to freeze into ice VII in laboratory experiments that use shock or ramp waves to compress liquid water to pressures exceeding 100,000 times that found at ambient conditions.

Compression experiments allow liquid water to be driven to an extremely undercooled state and nucleate a high-pressure polymorph known as ice VII. Theoretical work at LLNL has revealed the detailed of the nucleation and growth kinetics of this solidification process.

Philip Myint, a staff member in the Physics Division at LLNL and lead author of the research, explains:

“The conditions created by shock compression are unusual in that they produce an enormous driving force for the system to nucleate — there are unique considerations that need to be taken into account for solidification at high pressure. The liquid is driven away from equilibrium so quickly that it takes additional time for clusters to appear, a process known as transient nucleation.”

The findings are described in a paper published today by Physical Review Letters.