Ozone Layer will be Completely Healed by the 2060s

Ozone Layer will be Completely Healed by the 2060s 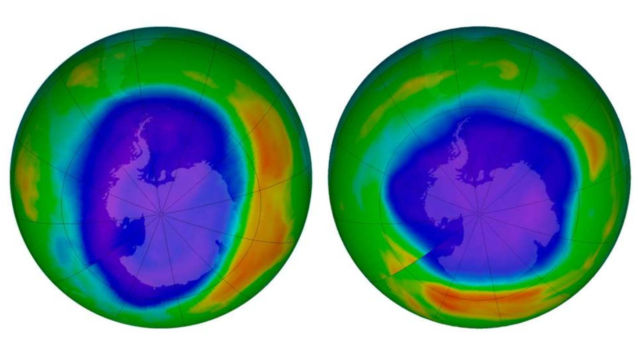 Good news for humanity!  Thanks to the 1987 Montreal Protocol, Ozone layer will be completely healed by the 2060s.

A study from the United Nations reports that holes in the upper atmosphere are recovering, and the hole above the Antarctic is healing at a rate of one to three per cent a year.

Ozone is a chemical protecting us from the Sun’s harmful ultraviolet rays, that are causing cancer.

According to the 2018 Scientific Assessment of Ozone Depletion, just released by the World Meteorological Organization and the United Nations Environment Programme:

“The Antarctic ozone hole is recovering, while continuing to occur every year.

As a result of the Montreal Protocol much more severe ozone depletion in the polar regions has been avoided.

At projected rates, Northern Hemisphere and mid-latitude ozone is scheduled to heal completely by the 2030s followed by the Southern Hemisphere in the 2050s and polar regions by 2060.”

Above, NASA satellite images show the ozone above Antarctica on Sep 2000 and on Sep 2018.  Credit NASA