Scientists are developing a laser so powerful it could send a spacecraft to Mars in days.

Is developing a 100-gigawatt laser, powerful enough to ‘ignite an entire city,’ to propel a small spacecraft to a nearby exoplanet.

Above, the Breakthrough Starshot “nanocraft” propelled toward the Alpha Centauri star system with a laser beam. Credit Breakthrough Foundation

Co-founded by Stephen Hawking, the project raised $100 million and is moving ahead to send small “StarChip” spacecraft, to nearby star systems.

In the last decade and a half, rapid technological advances have opened up the possibility of light-powered space travel at a significant fraction of light speed. This involves a ground-based light beamer pushing ultra-light nanocrafts – miniature space probes attached to lightsails – to speeds of up to 100 million miles an hour. Such a system would allow a flyby mission to reach Alpha Centauri in just over 20 years from launch, beaming home images of its recently-discovered planet Proxima b, and any other planets that may lie in the system, as well as collecting other scientific data such as analysis of magnetic fields. 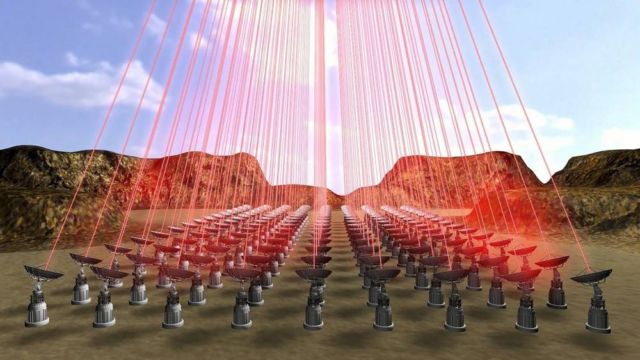 The laser array to propel Starshot’s “nanocraft” to nearby exoplanet. Credit Breakthrough Starshot

Breakthrough Starshot aims to demonstrate proof of concept for ultra-fast light-driven nanocrafts, and lay the foundations for a first launch to Alpha Centauri within the next generation. Along the way, the project could generate important supplementary benefits to astronomy, including solar system exploration and detection of Earth-crossing asteroids.