A Metallic Jewel Bug in the Sky

A Metallic Jewel Bug in the Sky 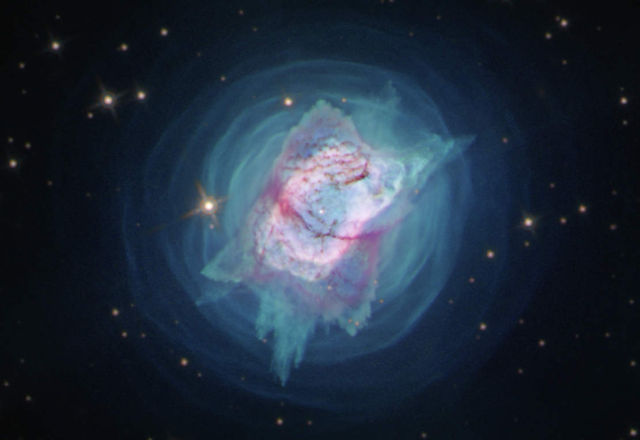 In this image NGC 7027 planetary nebula resembles a jewel bug, an insect with a brilliantly colorful metallic shell.

As nuclear fusion engines, most stars live placid lives for hundreds of millions to billions of years. But near the end of their lives they can turn into crazy whirligigs, puffing off shells and jets of hot gas.

Recently, NGC 7027’s central star was identified in a new wavelength of light — near-ultraviolet — for the first time by using Hubble’s unique capabilities. The near-ultraviolet observations will help reveal how much dust obscures the star and how hot the star really is. NGC 7027 is approximately 3,000 light-years away in the constellation Cygnus.

This object is a visibly diffuse region of gas and dust that may be the result of ejections by closely orbiting binary stars that were first slowly sloughing off material over thousands of years, and then entered a phase of more violent and highly directed mass ejections. Hubble first looked at this planetary nebula in 1998. By comparing the old and new Hubble observations, researchers now have additional opportunities to study the object as it changes over time.

Planetary nebulas are expanding shells of gas created by dying stars that are shedding their outer layers. When new ejections encounter older ejections, the resulting energetic collisions shape the nebula. The mechanisms underlying such sequences of stellar mass expulsion are far from fully understood, but researchers theorize that binary companions to the central, dying stars play essential roles in shaping them.