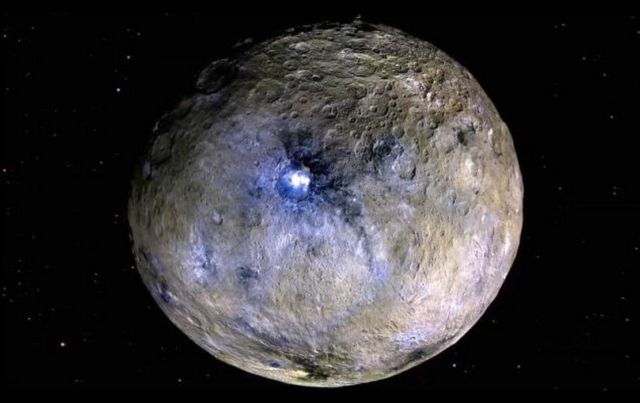 The saltwater reservoir just discovered on Dwarf Planet Ceres, is about 25 miles (40 kilometers) deep and hundreds of miles wide.

Data from NASA’s recent Dawn mission answers two long-unresolved questions: Is there liquid inside Ceres, and how long ago was the dwarf planet geologically active?

NASA’s Dawn spacecraft gave scientists extraordinary close-up views of the dwarf planet Ceres, which lies in the main asteroid belt between Mars and Jupiter. By the time the mission ended in October 2018, the orbiter had dipped to less than 22 miles (35 kilometers) above the surface, revealing crisp details of the mysterious bright regions Ceres had become known for.

Scientists had figured out that the bright areas were deposits made mostly of sodium carbonate – a compound of sodium, carbon, and oxygen. They likely came from liquid that percolated up to the surface and evaporated, leaving behind a highly reflective salt crust. But what they hadn’t yet determined was where that liquid came from. 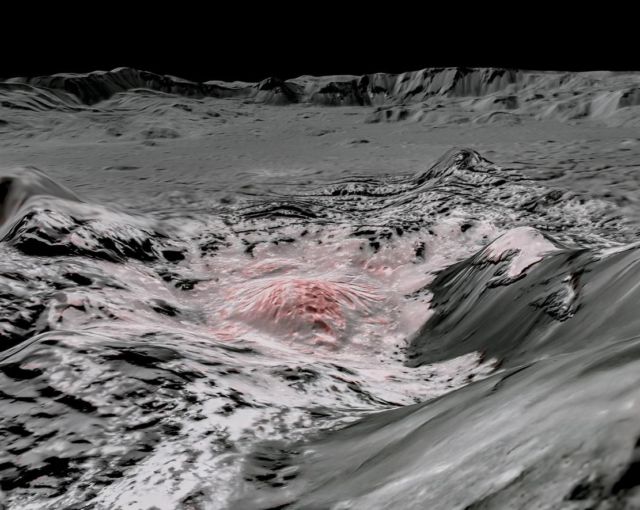 This mosaic image uses false color to highlight the recently exposed brine, or salty liquids, that were pushed up from a deep reservoir under Ceres’ crust. In this view of a region of Occator Crater, they appear reddish. Image credit: NASA/JPL-Caltech/UCLA/MPS/DLR/IDA

By analyzing data collected near the end of the mission, Dawn scientists have concluded that the liquid came from a deep reservoir of brine, or salt-enriched water. By studying Ceres’ gravity, scientists learned more about the dwarf planet’s internal structure and were able to determine that the brine reservoir is about 25 miles (40 kilometers) deep and hundreds of miles wide.

Ceres doesn’t benefit from internal heating generated by gravitational interactions with a large planet, as is the case for some of the icy moons of the outer solar system. But the new research, which focuses on Ceres’ 57-mile-wide (92-kilometer-wide) Occator Crater – home to the most extensive bright areas – confirms that Ceres is a water-rich world like these other icy bodies.

The findings, which also reveal the extent of geologic activity in Occator Crater, appear in a special collection of papers published by Nature Astronomy, Nature Geoscience, and Nature Communications on Aug. 10.

“Dawn accomplished far more than we hoped when it embarked on its extraordinary extraterrestrial expedition,” said Mission Director Marc Rayman of NASA’s Jet Propulsion Laboratory in Southern California. “These exciting new discoveries from the end of its long and productive mission are a wonderful tribute to this remarkable interplanetary explorer.”