A Solar Cell turns Sunlight and Water into Hydrogen and Electricity

A Solar Cell turns Sunlight and Water into Hydrogen and Electricity 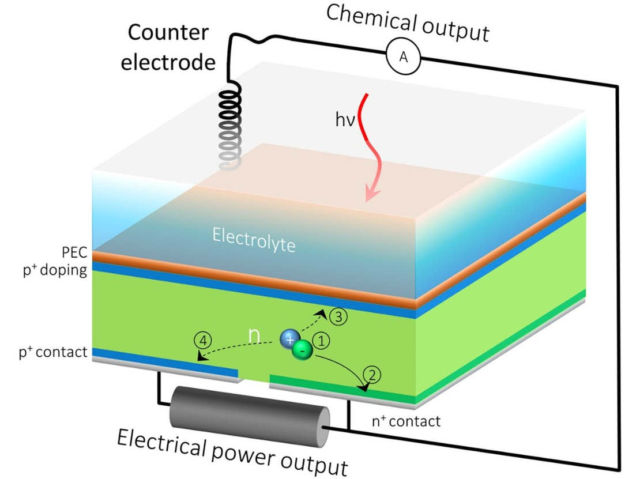 Scientists created an artificial photosynthesis system, that generates at the same time hydrogen fuel and electricity.

In the quest for abundant, renewable alternatives to fossil fuels, scientists have sought to harvest the sun’s energy through “water splitting,” an artificial photosynthesis technique that uses sunlight to generate hydrogen fuel from water.

Now researchers at the U.S. Department of Energy’s Lawrence Berkeley National Laboratory (Berkeley Lab) and the Joint Center for Artificial Photosynthesis (JCAP), a DOE Energy Innovation Hub, have come up with a new recipe for renewable fuels that could bypass the limitations in current materials: an artificial photosynthesis device called a “hybrid photoelectrochemical and voltaic (HPEV) cell” that turns sunlight and water into not just one, but two types of energy – hydrogen fuel and electricity. The paper describing this work was published on Oct. 29 in Nature Materials.

Above image: The HPEV cell’s extra back outlet would allow the current to be split into two, so that one part of the current contributes to solar fuels generation, and the rest can be extracted as electrical power. Credit: Berkeley Lab, JCAP