A Typical Neutron Star is only 22 Kilometers Wide

A Typical Neutron Star is only 22 Kilometers Wide 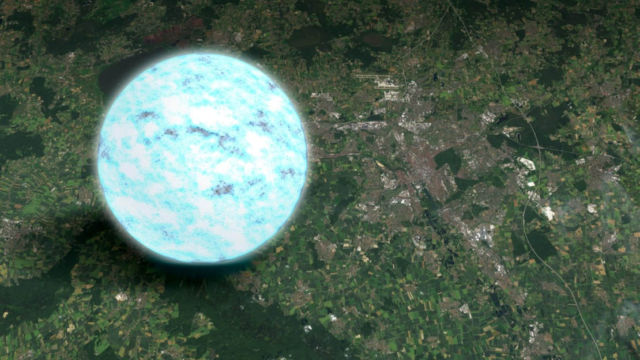 New ultra-precise measurement shows that a Neutron star, witch is about 1.4 times as heavy as our Sun, has a radius of about 11 kilometers.

An international research team led by members of the Max Planck Institute for Gravitational Physics (Albert Einstein Institute; AEI) has obtained new measurements of how big neutron stars are. To do so, they combined a general first-principles description of the unknown behavior of neutron star matter with multi-messenger observations of the binary neutron star merger GW170817.

Their results, which appeared in Nature Astronomy today, are more stringent by a factor of two than previous limits and show that a typical neutron star has a radius close to 11 kilometers.

They also find that neutron stars merging with black holes are in most cases likely to be swallowed whole, unless the black hole is small and/or rapidly rotating. This means that while such mergers might be observable as gravitational-wave sources, they would be invisible in the electromagnetic spectrum.

“We find that the typical neutron star, which is about 1.4 times as heavy as our Sun has a radius of about 11 kilometers,” says Badri Krishnan, who leads the research team at the AEI Hannover. “Our results limit the radius to likely be somewhere between 10.4 and 11.9 kilometers. This is a factor of two more stringent than previous results.”

“Binary neutron star mergers are a gold mine of information!” says Collin Capano, researcher at the AEI Hannover and lead author of the Nature Astronomy study. “Neutron stars contain the densest matter in the observable universe. In fact, they are so dense and compact, that you can think of the entire star as a single atomic nucleus, scaled up to the size of a city. By measuring these objects’ properties, we learn about the fundamental physics that governs matter at the sub-atomic level.

It’s a bit mind boggling. GW170817 was caused by the collision of two city-sized objects 120 million years ago, when dinosaurs were walking around here on Earth. This happened in a galaxy a billion trillion kilometers away. From that, we have gained insight into sub-atomic physics.”