An Exoplanet covered by Water discovered

An Exoplanet covered by Water discovered 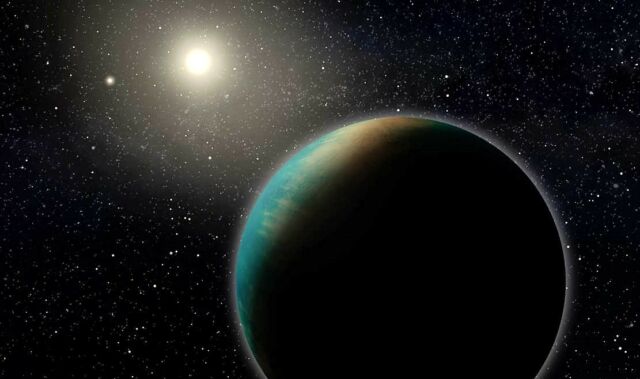 Astronomers find an exoplanet about the size of Earth, in the habitable zone. They believe it could be an “ocean planet.”

An international team of researchers led by Charles Cadieux, a Ph.D. student at the Université de Montréal and member of the Institute for Research on Exoplanets (iREx), has announced the discovery of an exoplanet orbiting TOI-1452, one of two small stars in a binary system located in the Draco constellation about 100 light-years from Earth.

The exoplanet, known as TOI-1452 b, is slightly greater in size and mass than Earth and is located at distance from its star where its temperature would be neither too hot nor too cold for liquid water to exist on its surface, in the habitable zone. The astronomers believe it could be an “ocean planet,” a planet completely covered by a thick layer of water, similar to some of Jupiter’s and Saturn’s moons.

“I’m extremely proud of this discovery because it shows the high calibre of our researchers and instrumentation,” said René Doyon, Université de Montréal Professor and Director of iREx and of the Observatoire du Mont-Mégantic (OMM). “It is thanks to the OMM, a special instrument designed in our labs called SPIRou and an innovative analytic method developed by our research team that we were able to detect this one-of-a-kind exoplanet.”

source Institute for Research on Exoplanets