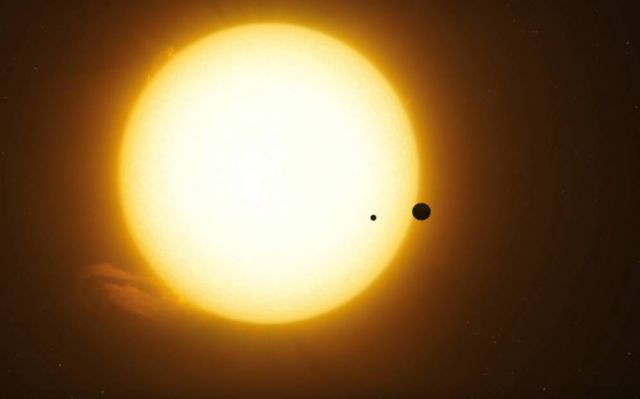 Astronomers find first compelling evidence for a Moon, an exomoon, outside our solar system.

Using the Hubble Space Telescope to validate or refute the moon’s presence, Columbia astronomers made new observations of a candidate exomoon associated with Kepler-1625b.

In a paper published Oct. 3 in the journal Science Advances, Alex Teachey and David Kipping report that the detection of a candidate exomoon – that is, moons orbiting planets in other star systems – is unusual because of its large size, comparable to the diameter of Neptune. Such gargantuan moons do not exist in our own solar system, where nearly 200 natural satellites have been cataloged. 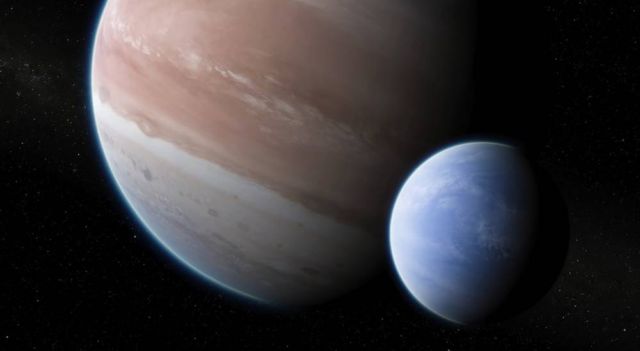 An artist’s impression of exoplanet Kepelr-1625b and its moon.  Credit Dan Durda

“We find evidence in favor of the moon hypothesis, based on timing deviations and a flux decrement from the star consistent with a large transiting exomoon. Self-consistent photodynamical modeling suggests that the planet is likely several Jupiter masses, while the exomoon has a mass and radius similar to Neptune. Since our inference is dominated by a single but highly precise Hubble epoch, we advocate for future monitoring of the system to check model predictions and confirm repetition of the moon-like signal.”

“This would be the first case of detecting a moon outside our solar system. If confirmed by follow-up Hubble observations, the finding could provide vital clues about the development of planetary systems and may cause experts to revisit theories of how moons form around planets.”