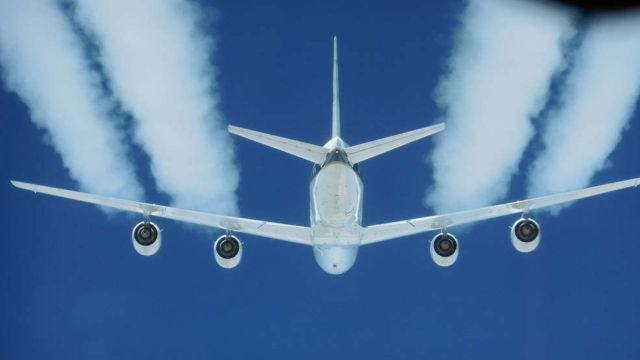 Using biofuels to help power jet engines reduces particle emissions in their exhaust by as much as 50 to 70 percent, in a new study conclusion that bodes well for airline economics and Earth’s environment.
Above, the DC-8’s four engines burned either JP-8 jet fuel or a 50-50 blend of JP-8 and renewable alternative fuel of hydro processed esters and fatty acids produced from camelina plant oil.  Credits: NASA/SSAI Edward Winstead

The findings are the result of a cooperative international research program led by NASA and involving agencies from Germany and Canada, and are detailed in a study published in the journal Nature.

During flight tests in 2013 and 2014 near NASA’s Armstrong Flight Research Center in Edwards, California, data was collected on the effects of alternative fuels on engine performance, emissions and aircraft-generated contrails at altitudes flown by commercial airliners. The test series were part of the Alternative Fuel Effects on Contrails and Cruise Emissions Study, or ACCESS.

Contrails are produced by hot aircraft engine exhaust mixing with the cold air that is typical at cruise altitudes several miles above Earth’s surface, and are composed primarily of water in the form of ice crystals.

Researchers are most interested in persistent contrails because they create long-lasting, and sometimes extensive, clouds that would not normally form in the atmosphere, and are believed to be a factor in influencing Earth’s environment.

“Soot emissions also are a major driver of contrail properties and their formation,” said Bruce Anderson, ACCESS project scientist at NASA’s Langley Research Center in Hampton, Virginia. “As a result, the observed particle reductions we’ve measured during ACCESS should directly translate into reduced ice crystal concentrations in contrails, which in turn should help minimize their impact on Earth’s environment.”