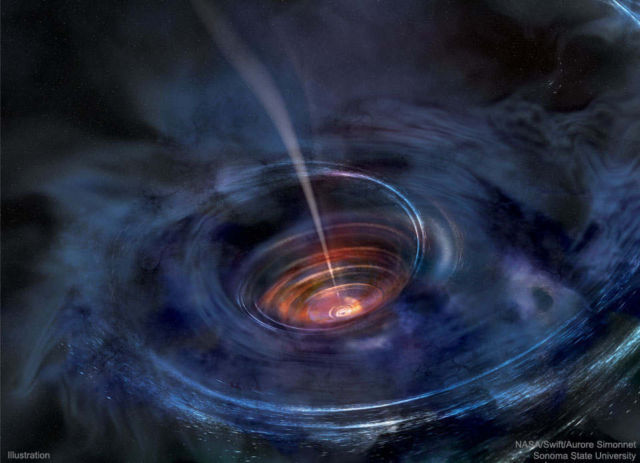 Recent observations are providing new clues about what happens when a black hole devours a star.

In the center of a distant galaxy, almost 300 million light years from Earth, scientists have discovered a supermassive black hole that is “choking” on a sudden influx of stellar debris.

Above, in this artist’s rendering, a thick accretion disk has formed around a supermassive black hole following the tidal disruption of a star that wandered too close. Stellar debris has fallen toward the black hole and collected into a thick chaotic disk of hot gas. Flashes of X-ray light near the center of the disk result in light echoes that allow astronomers to map the structure of the funnel-like flow, revealing for the first time strong gravity effects around a normally quiescent black hole.   Credit NASA/Swift/Aurore Simonnet, Sonoma State University

In a paper published in Astrophysical Journal Letters, researchers from MIT, NASA’s Goddard Space Flight Center, and elsewhere report on a “tidal disruption flare” — a dramatic burst of electromagnetic activity that occurs when a black hole obliterates a nearby star. The flare was first discovered on Nov. 11, 2014, and scientists have since trained a variety of telescopes on the event to learn more about how black holes grow and evolve.