Black Hole found outside our Galaxy for the first time

Black Hole found outside our Galaxy for the first time 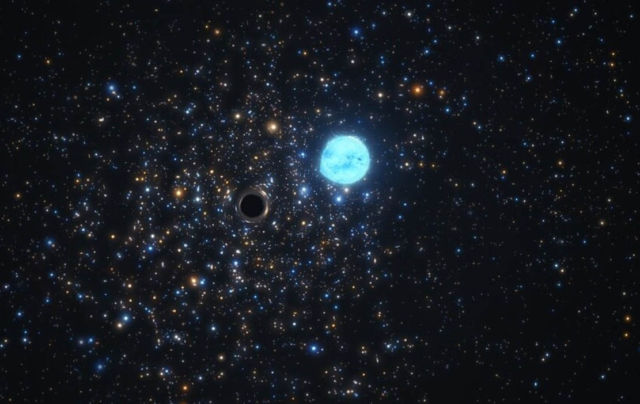 A black hole found outside our galaxy for the first time, hiding in star cluster.

Using the European Southern Observatory’s Very Large Telescope (ESO’s VLT), astronomers have discovered a small black hole outside the Milky Way by looking at how it influences the motion of a star in its close vicinity. This is the first time this detection method has been used to reveal the presence of a black hole outside of our galaxy. The method could be key to unveiling hidden black holes in the Milky Way and nearby galaxies, and to help shed light on how these mysterious objects form and evolve.

The newly found black hole was spotted lurking in NGC 1850, a cluster of thousands of stars roughly 160 000 light-years away in the Large Magellanic Cloud, a neighbour galaxy of the Milky Way.

“Similar to Sherlock Holmes tracking down a criminal gang from their missteps, we are looking at every single star in this cluster with a magnifying glass in one hand trying to find some evidence for the presence of black holes but without seeing them directly,” says Sara Saracino from the Astrophysics Research Institute of Liverpool John Moores University in the UK, who led the research now accepted for publication in Monthly Notices of the Royal Astronomical Society. “The result shown here represents just one of the wanted criminals, but when you have found one, you are well on your way to discovering many others, in different clusters.”

This first “criminal” tracked down by the team turned out to be roughly 11 times as massive as our Sun. The smoking gun that put the astronomers on the trail of this black hole was its gravitational influence on the five-solar-mass star orbiting it.

Astronomers have previously spotted such small, “stellar-mass” black holes in other galaxies by picking up the X-ray glow emitted as they swallow matter, or from the gravitational waves generated as black holes collide with one another or with neutron stars.

However, most stellar-mass black holes don’t give away their presence through X-rays or gravitational waves. “The vast majority can only be unveiled dynamically,” says Stefan Dreizler, a team member based at the University of Göttingen in Germany. “When they form a system with a star, they will affect its motion in a subtle but detectable way, so we can find them with sophisticated instruments.”