Clearest view yet of Center of the Milky Way

Clearest view yet of Center of the Milky Way 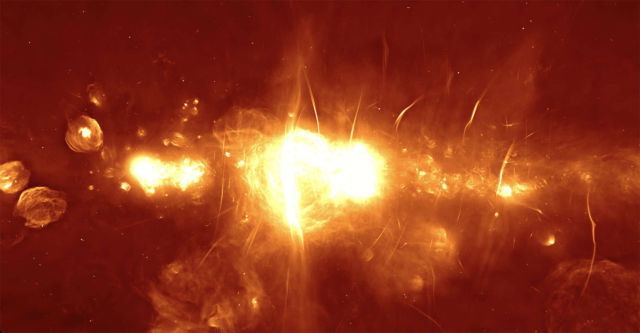 Based on observations made with South Africa’s MeerKAT radio telescope, this image shows the clearest view yet of the Galactic Center.

Above, the black hole at the center of the Milky Way.   Credit: SARAO

At the distance of the galactic center (located within the white area near image center), this 2 degree by 1 degree panorama corresponds to an area of approximately 1,000 light-years by 500 light-years.

“We wanted to show the science capabilities of this new instrument. The centre of the galaxy was an obvious target: unique, visually striking and full of unexplained phenomena – but also notoriously hard to image using radio telescopes.

Although it’s early days with MeerKAT, and a lot remains to be optimised, we decided to go for it – and were stunned by the results.”

The center of the Milky Way, 25,000 light-years away from Earth and lying behind the constellation Sagittarius (the “Teapot”), is forever enshrouded by intervening clouds of gas and dust, making it invisible from Earth using ordinary telescopes. However, infrared, X-ray, and in particular, radio wavelengths penetrate the obscuring dust and open a window into this distinctive region with its unique 4 million solar mass black hole.