Over the past few weeks, Curiosity rover send us some spectacular imagery of solar eclipses caused by Phobos and Deimos, Mars‘ two moons.

When NASA’s Curiosity Mars rover landed in 2012, it brought along eclipse glasses. The solar filters on its Mast Camera (Mastcam) allow it to stare directly at the Sun.

Above, this series of images shows the Martian moon Phobos as it crossed in front of the Sun, as seen by NASA’s Curiosity Mars rover on Tuesday, March 26, 2019 (Sol 2359). Credit: NASA/JPL-Caltech/MSSS 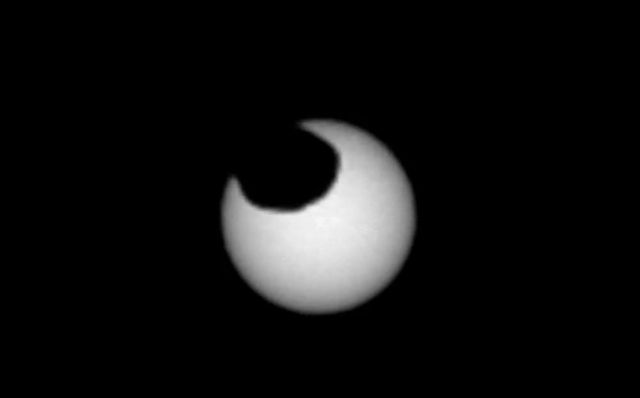 In addition to capturing each moon crossing in front of the Sun, one of Curiosity’s Navigation Cameras (Navcams) observed the shadow of Phobos on March 25, 2019 (Sol 2358). As the moon’s shadow passed over the rover during sunset, it momentarily darkened the light.

Solar eclipses have been seen many times by Curiosity and other rovers in the past. Besides being cool – who doesn’t love an eclipse? – these events also serve a scientific purpose, helping researchers fine-tune their understanding of each moon’s orbit around Mars.

Before the Spirit and Opportunity rovers landed in 2004, there was much higher uncertainty in the orbit of each moon, said Mark Lemmon of Texas A&M University, College Station, a co-investigator with Curiosity’s Mastcam. The first time one of the rovers tried to image Deimos eclipsing the Sun, they found the moon was 25 miles (40 kilometers) away from where they expected. 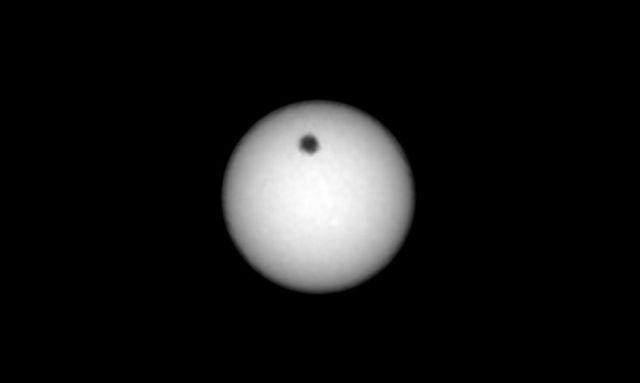 This image shows the Martian moon Deimos as it crossed in front of the Sun, as seen by NASA’s Curiosity Mars rover on Sunday, March 17, 2019 (the 2,350th Martian day, or sol, of the mission).  Credit: NASA/JPL-Caltech/MSSS

“More observations over time help pin down the details of each orbit,” Lemmon said. “Those orbits change all the time in response to the gravitational pull of Mars, Jupiter or even each Martian moon pulling on the other.”

These events also help make Mars relatable, Lemmon said: “Eclipses, sunrises and sunsets and weather phenomena all make Mars real to people, as a world both like and unlike what they see outside, not just a subject in a book.”