Home/Posts/TECHNOLOGY/Space/Designing a Venus Rover
Previous Next 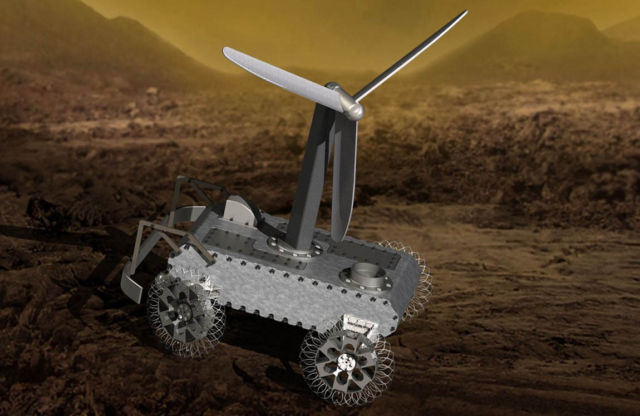 NASA wants your help designing a Venus rover, like this one possible wind-powered conceptual vehicle.

To survive the planet’s intense heat and crushing surface pressure, the rover would need an obstacle-avoidance system unlike any other.

NASA’s Jet Propulsion Laboratory in Pasadena, California, under a grant from the NASA Innovative Advanced Concepts program, is running a public challenge to develop an obstacle avoidance sensor for a possible future Venus rover. The “Exploring Hell: Avoiding Obstacles on a Clockwork Rover” challenge is seeking the public’s designs for a sensor that could be incorporated into the design concept.

Venus is an extreme world. With a surface temperature in excess of 840 degrees Fahrenheit and a surface pressure 90 times that of Earth, Venus can turn lead into a puddle and crush a nuclear-powered submarine with ease. While many missions have visited our sister planet, only about a dozen have made contact with the surface of Venus before quickly succumbing to the oppressive heat and pressure.

The last spacecraft to touch the planet’s surface, the Soviet Vega 2, landed in 1985. Now, engineers and scientists at JPL are studying mission designs that can survive the hellish landscape.

“Earth and Venus are basically sibling planets, but Venus took a turn at one point and became inhospitable to life as we know it,” said Jonathan Sauder, a senior mechatronics engineer at JPL and principal investigator for the Automaton Rover for Extreme Environments (AREE) concept. “By getting on the ground and exploring Venus, we can understand what caused Earth and Venus to diverge on wildly different paths and can explore a foreign world right in our own backyard.”