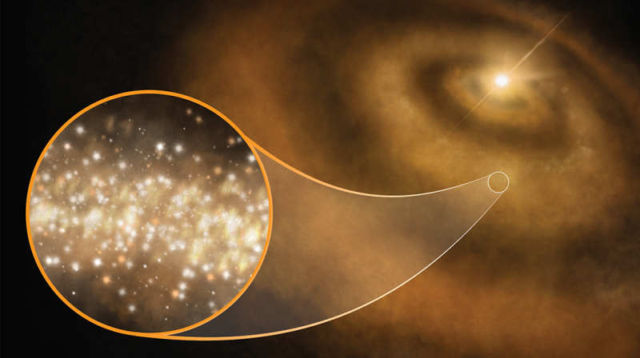 The mysterious ‘glow’ in the Milky Way that has baffled astronomers for decades, may caused by clouds filled with diamonds that surround distant stars.

Some of the tiniest diamonds in the universe – bits of crystalline carbon hundreds of thousands of times smaller than a grain of sand – have been detected swirling around three infant star systems in the Milky Way. These microscopic gemstones are neither rare nor precious; they are, however, exciting for astronomers who identified them as the source of a mysterious cosmic microwave “glow” emanating from several protoplanetary disks in our galaxy.

For decades, astronomers have puzzled over the exact source of a peculiar type of faint microwave light emanating from a number of regions across the Milky Way. Known as anomalous microwave emission (AME), this light comes from energy released by rapidly spinning nanoparticles – bits of matter so small that they defy detection by ordinary microscopes. (The period on an average printed page is approximately 500,000 nanometers across.)

Jane Greaves, an astronomer at Cardiff University in Wales and lead author on a paper announcing this result in Nature Astronomy.

“Though we know that some type of particle is responsible for this microwave light, its precise source has been a puzzle since it was first detected nearly 20 years ago.”