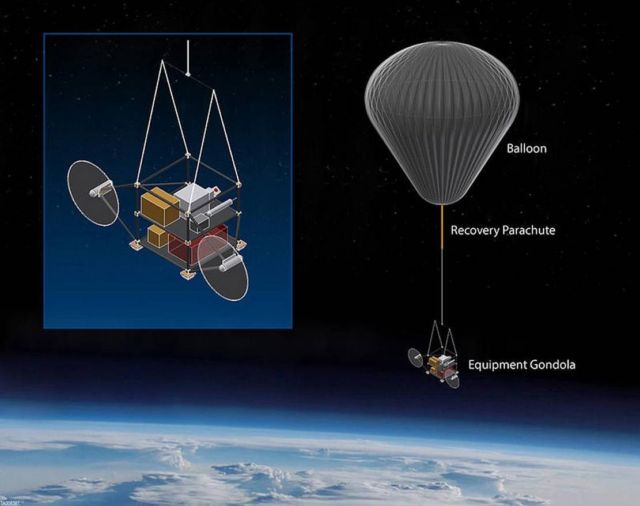 Bill Gates wants to spray millions of tonnes of dust into the stratosphere to dim the sun and stop global warming.

The plan could be fact within a decade: Every day more than 800 giant aircraft would lift to a height of 12 miles above the Earth’s surface, millions of tonnes of chalk dust and then sprinkle the lot high around the stratosphere.

Above image, SCoPEx initial $3 million test, would use a high-altitude scientific balloon to raise around 2kg of calcium carbonate dust — the size of a bag of flour — into the atmosphere 12 miles above the desert of New Mexico.

SCoPEx will make quantitative measurements of aspects of the aerosol microphysics and atmospheric chemistry that are currently highly uncertain in the simulations. It is not a test of solar geoengineering per se. Instead, it will observe how particles interact with one another, with the background stratospheric air, and with solar and infrared radiation. Improved understanding of these processes will help answer applied questions such as, is it possible to find aerosols that can reduce or eliminate ozone loss, without increasing other physical risks? 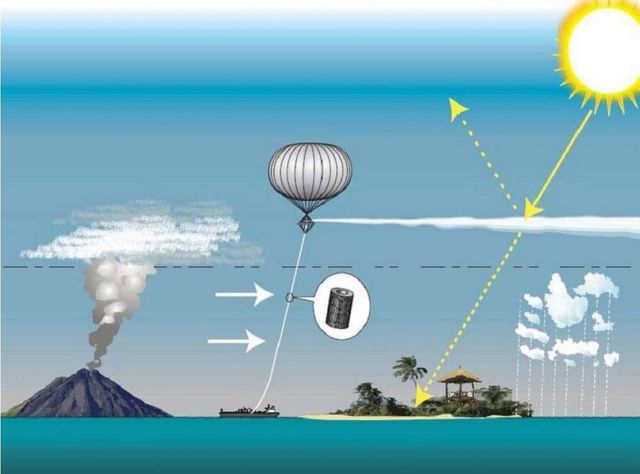 The SPICE project will investigate the feasibility of one so-called geoengineering technique: the idea of simulating natural processes that release small particles into the stratosphere, which then reflect a few percent of incoming solar radiation, with the effect of cooling the Earth with relative speed.  Credit wikimedia

At the heart of SCoPEx is a scientific balloon, fitted with repurposed off-the-shelf airboat propellers. The repurposed propellers serve two functions. First, the propeller wake forms a well mixed volume (roughly 1 km long and 100 meters in diameter) that serves as an experimental ‘beaker’ in which we can add gasses or particles. Second, the propellers allow us to reposition the gondola to different locations within the volume to measure the properties of the perturbed air. The payload can achieve speeds of a few meters per second (walking speed) relative to the surrounding air, generally for about ten minutes at a time.