Home/Posts/TECHNOLOGY/Space/Earth surrounded by Airglow
Previous Next 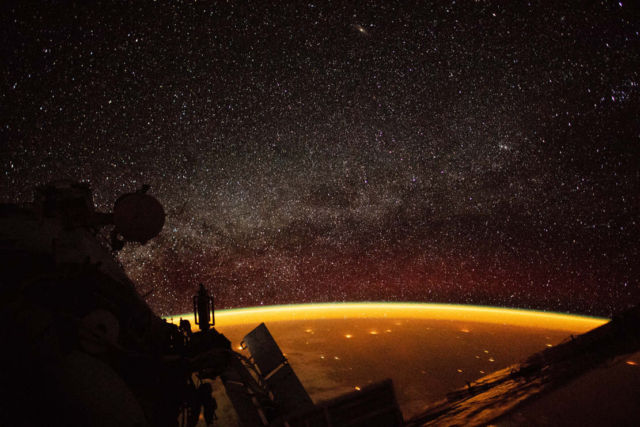 An astronaut aboard the Space Station (ISS) shot this photograph while orbiting at an altitude of more than 250 miles over Australia.

The orange hue enveloping Earth, captured on October 7, 2018, is known as airglow—diffuse bands of light that stretch 50 to 400 miles into our atmosphere.

The phenomenon typically occurs when molecules (mostly nitrogen and oxygen) are energized by ultraviolet (UV) radiation from sunlight. To release that energy, atoms in the lower atmosphere bump into each other and lose energy in the collision. The result is colorful airglow.

Airglow reveals some of the workings of the upper reaches of our atmosphere. It can help scientists learn about the movement of particles near the interface of Earth and space, including the connections between space weather and Earth weather. Satellites offer one way to study this dynamic zone. NASA’s Ionospheric Connection Explorer (ICON) satellite will help scientists understand the physical processes at work where Earth’s atmosphere interacts with near-Earth space.