Earth’s Magnetic Poles could be about to Flip

Earth’s Magnetic Poles could be about to Flip

Scientists believe that Earth‘s magnetic poles are about to flip, because Earth’s magnetic field has been getting weaker.

The Earth’s magnetic field that protecting our planet like a giant shield from dangerous solar and cosmic rays, becoming weaker by 15 per cent over the last 200 years.

According scientists, this could be a major sign that the planet’s poles are about to flip.

If this happens, solar winds could punch holes into the Earth’s ozone layer, affecting weather, damaging power grids,  and parts of the planet could become uninhabitable.

The above animation shows the movement of the north magnetic pole at 10-year intervals from 1970 to 2020. The red and blue lines indicate “declination,” the difference between magnetic north and true north depending on where one is standing; on the green line, a compass would point to true north. Credit NOAA National Centers for Environmental Information

In this animation, the blue lines indicate a weaker magnetic field, the red lines a stronger one, and the green line the boundary between them, at 10-year intervals from 1910 to 2020. The field is weakening over South America, and the red area over North America is losing strength.  Credit NOAA National Centers for Environmental Information 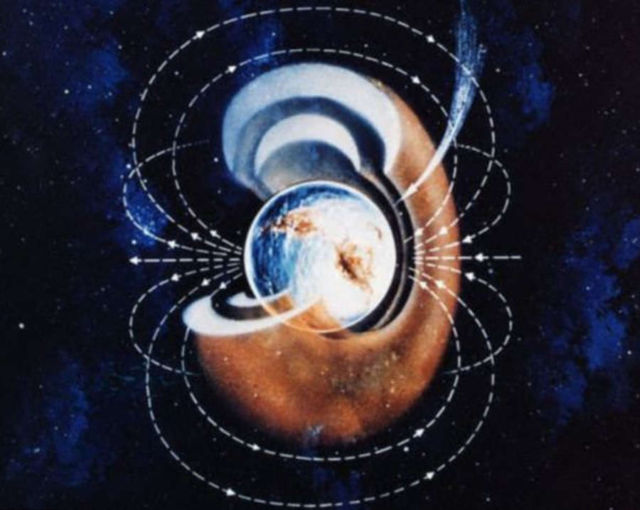 The Earth’s magnetic field is generated in the very hot molten core of the planet.