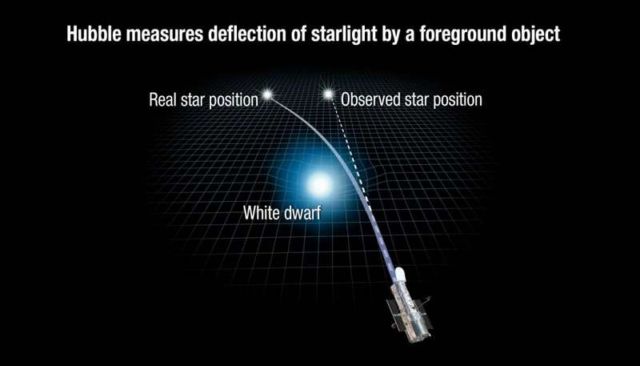 Scientists finally witnessed a phenomenon that Einstein thought impossible, they just weighed a star with gravity.

Above, the illustration shows how the gravity of a white dwarf star warps space and bends the light of a distant star behind it.  Credits: NASA, ESA, and A. Feild (STScI)

Astronomers have used the sharp vision of NASA’s Hubble Space Telescope to repeat a century-old test of Einstein’s general theory of relativity. The Hubble team measured the mass of a white dwarf, the burned-out remnant of a normal star, by seeing how much it deflects the light from a background star.

This observation represents the first time Hubble has witnessed this type of effect created by a star. The data provide a solid estimate of the white dwarf’s mass and yield insights into theories of the structure and composition of the burned-out star. 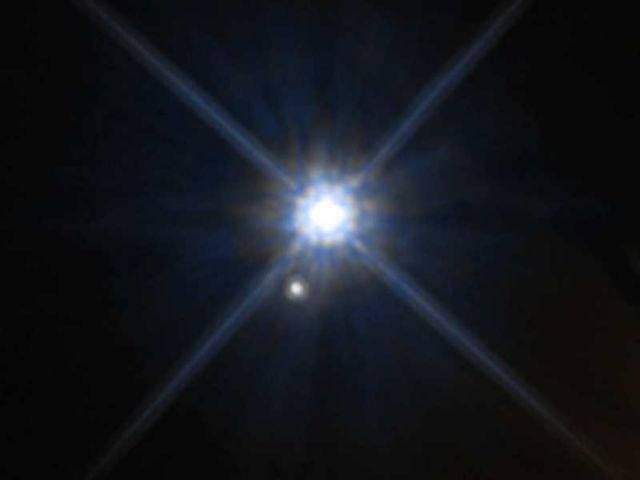 Looks can be deceiving. In this Hubble Space Telescope image, the white dwarf star Stein 2051B and the smaller star below it appear to be close neighbors. The stars, however, reside far away from each other. Stein 2051B is 17 light-years from Earth; the other star is about 5,000 light-years away. Stein 2051B is named for its discoverer, Dutch Roman Catholic priest and astronomer Johan Stein. Credits: NASA, ESA, and K. Sahu (STScI)

“This microlensing method is a very independent and direct way to determine the mass of a star,” explained lead researcher Kailash Sahu of the Space Telescope Science Institute (STScI) in Baltimore, Maryland. “It’s like placing the star on a scale: the deflection is analogous to the movement of the needle on the scale.”