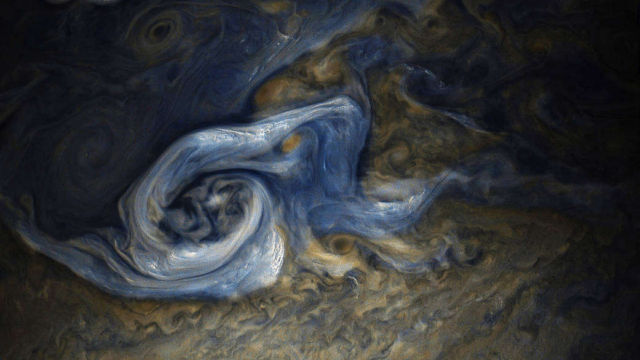 At the time the image was taken, the spacecraft was about 6,281 miles (10,108 kilometers) from the tops of the clouds of Jupiter at a latitude of 41.84 degrees. The spatial scale in this image is 4.2 miles/pixel (6.7 kilometers/pixel).

The storm is rotating counter-clockwise with a wide range of cloud altitudes. The darker clouds are expected to be deeper in the atmosphere than the brightest clouds. Within some of the bright “arms” of this storm, smaller clouds and banks of clouds can be seen, some of which are casting shadows to the right side of this picture (sunlight is coming from the left). The bright clouds and their shadows range from approximately 4 to 8 miles (7 to 12 kilometers) in both widths and lengths. These appear similar to the small clouds in other bright regions Juno has detected and are expected to be updrafts of ammonia ice crystals possibly mixed with water ice.