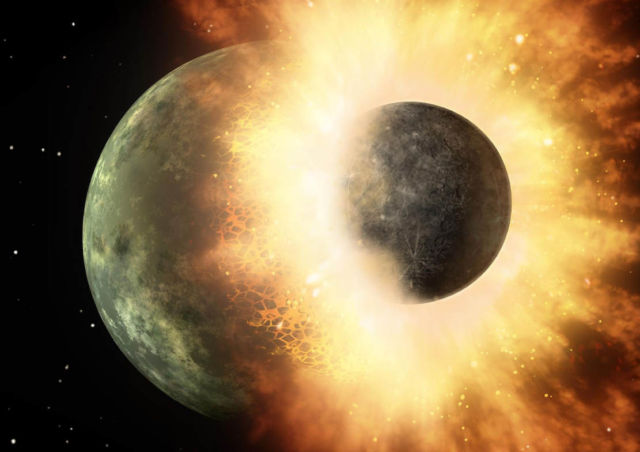 Enormous pieces of alien planet are buried inside Earth, after a gigantic crash, ‘millions of times larger than Mount Everest.’

4.5 billion years ago, a small protoplanet called Theia crashed into the Earth, sending rocks and debris into space that possible formed the Moon.

In a new interview with Insider, the scientist behind that research Qian Yuan, explains the cosmic crash, that left pieces of Theia buried beneath the Earth.

Above: An artist’s depiction of an impact of a protoplanet like Theia and Earth. Credit NASA/JPL-Caltech/Wikimedia Commons

According to the Arizona State University Yuan’s research, the enormous masses are “millions of times larger than Mount Everest in terms of volume.”

Theia (Θεία in Greek) or Orpheus (Ορφεύς) is a hypothesized ancient planet in the early Solar System that, according to the giant-impact hypothesis, collided with the early Earth around 4.5 billion years ago, with some of the resulting ejected debris gathering to form the Moon.

According to one version of the hypothesis, Theia was an Earth trojan about the size of Mars, with a diameter of about 6,102 km (3,792 miles). Additional evidence published in 2019 suggests that Theia might have formed in the outer Solar System rather than the inner Solar System, and that much of Earth’s water originated on Theia.