Astronomers get first look at new, extremely rare galaxy, that doesn’t look quite like anything have observed before.

Approximately 359 million light-years away from Earth, there is a galaxy with an innocuous name (PGC 1000714). New research provides a first description of a well-defined elliptical-like core surrounded by two circular rings — a galaxy that appears to belong to a class of rarely observed, Hoag-type galaxies. This work was done by scientists at the University of Minnesota Duluth and the North Carolina Museum of Natural Sciences.

Above, PGC 1000714 features not one, but two outer rings and it’s the first known galaxy of its kind.  Credit Ryan Beauchemin

“Less than 0.1% of all observed galaxies are Hoag-type galaxies,” says Burcin Mutlu-Pakdil, lead author of a paper on this work and a graduate student at the Minnesota Institute for Astrophysics.

Hoag-type galaxies are round cores surrounded by a circular ring, with nothing visibly connecting them. The majority of observed galaxies are disc-shaped like our own Milky Way. Galaxies with unusual appearances give astronomers unique insights into how galaxies are formed and change. 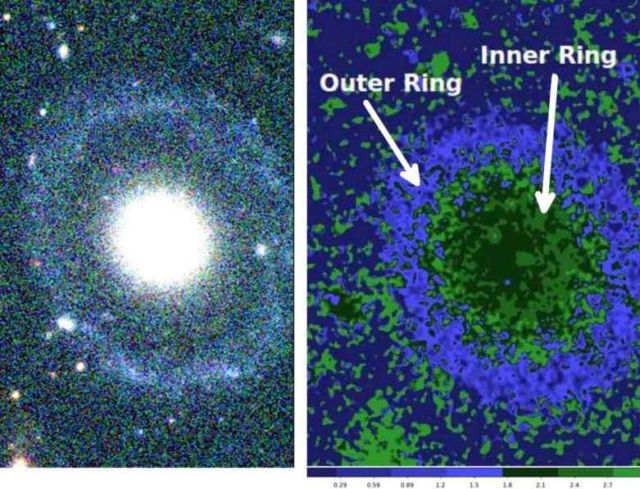