This is the latest image from ESA’s Mars Express, captured over two ruptures in the martian crust that form part of the mighty Valles Marineris canyon system.

Valles Marineris cuts across Mars like the Grand Canyon cuts across the United States, except the latter is miniscule in comparison.

At 4000 km long, 200 km wide and up to 7 km deep, Valles Marineris is almost ten times longer, 20 times wider and five times deeper than the Grand Canyon. As the largest canyon system in the Solar System, it would span the distance from the northern tip of Norway to the southern tip of Sicily. 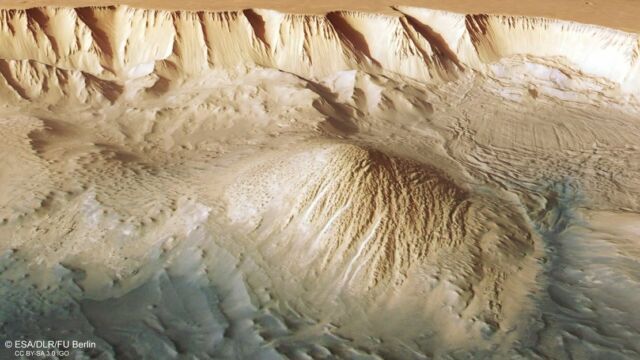 There’s another big difference between the two: whilst the Grand Canyon was formed as the Colorado River eroded away rock, Valles Marineris is thought to have formed through the drifting apart of tectonic plates. 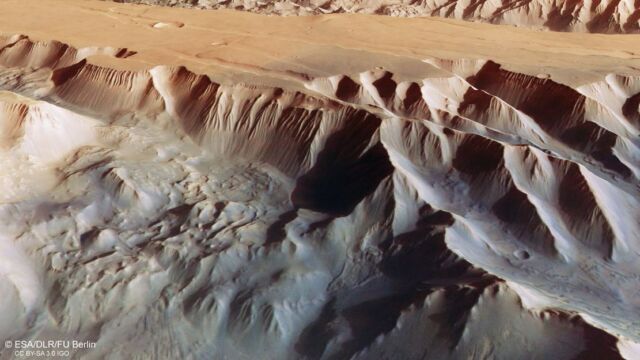 The image shows two trenches (or chasma) that form part of western Valles Marineris. On the left (south), is the 840 km-long Ius Chasma, and on the right (north) is the 805 km-long Tithonium Chasma. Whilst these high-resolution images show incredible surface detail, it is only when we look at an elevation map (see above) that we realise how spectacularly deep the chasmata are – up to 7 km! At 4809 m, the Alps’ tallest mountain Mont Blanc would be dwarfed if it was put inside Tithonium Chasma.