First ever direct Observation of an Exoplanet

First ever direct Observation of an Exoplanet 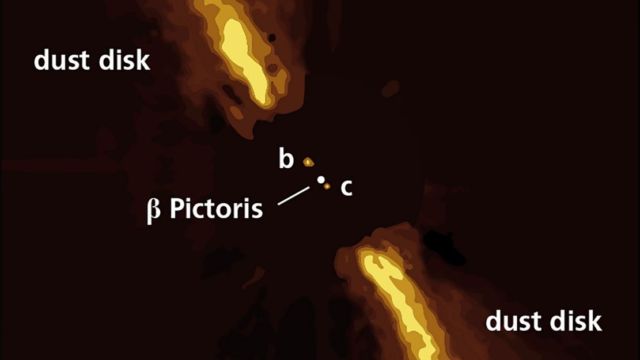 Astronomers using the GRAVITY instrument at the VLT telescopes in Chile have now obtained the first direct confirmation of an exoplanet, the β Pictoris c, discovered by radial-velocity.

As the planet “β Pictoris c” is in a close orbit around its parent star, this is the first time that the faint glint of the exoplanet next to the glare of the star has been directly observed. With these observations, astronomers can obtain both the flux and dynamical masses of exoplanets, allowing them to put closer constrains on formation models for exoplanets.

Combining the light of the four large VLT telescopes, astronomers in the GRAVITY collaboration have managed to directly observe the glint of light coming from an exoplanet close to its parent star. The planet called “β Pictoris c” is the second planet found to orbit its parent star. It was originally detected by the so-called ‘radial velocity’, which measures the drag and pull on the parent star due to the planet’s orbit. β Pictoris c is so close to its parent star that even the best telescopes were not able to directly image the planet so far.

These schematic images show the geometry of the β Pictoris system: The image on the left shows both the star and the two planets embedded in the dusty disk in the orientation as visible from the vantage point of the Solar System.  Credit: Axel Quetz / MPIA Graphics Department

“This is the first direct confirmation of a planet detected by the radial velocity method”, says Sylvestre Lacour, leader of the ExoGRAVITY observing programme. Radial velocity measurements have been used for many decades by astronomers, and have allowed for the detection of hundreds of exoplanets. But never before were the astronomers able to obtain a direct observation of one of those planets. This was only possible because the GRAVITY instrument, situated in a laboratory underneath the four telescopes it uses, is a very precise instrument. It observes the light from the parent star with all four VLT telescopes at the same time and combines them into a virtual telescope with the detail required to reveal β Pictoris c.

“It is amazing, what level of detail and sensitivity we can achieve with GRAVITY”, marvels Frank Eisenhauer, the lead scientist of the GRAVITY project at MPE. “We are just starting to explore stunning new worlds, from the supermassive black hole at the centre of our galaxy to planets outside the solar system.”