First-Ever Direct Picture of a Planet Being Born

First-Ever Direct Picture of a Planet Being Born 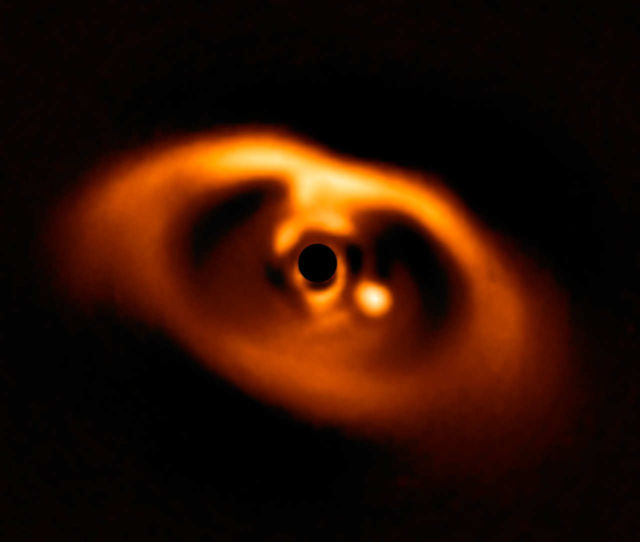 Astronomers have captured for the first time an image of a baby exoplanet, through the disc of dust that surrounds its star.

First confirmed image of newborn planet caught with ESO’s VLT, is an orange dwarf 113.4 parsecs (370 light-years) away from Earth.

SPHERE, a planet-hunting instrument on ESO’s Very Large Telescope, has captured the first confirmed image of a planet caught in the act of forming in the dusty disc surrounding around the very young star PDS 70.

The planet stands out very clearly in the new observations, visible as a bright point to the right of the blackened centre of the image. It is located roughly three billion kilometres from the central star, roughly equivalent to the distance between Uranus and the Sun.

The analysis shows that PDS 70b is a giant gas planet with a mass a few times that of Jupiter. The planet’s surface has a temperature of around 1000°C, making it much hotter than any planet in our own Solar System.

The dark region at the centre of the image is due to a coronagraph, a mask which blocks the blinding light of the central star and allows astronomers to detect its much fainter disc and planetary companion. Without this mask, the faint light from the planet would be utterly overwhelmed by the intense brightness of PDS 70.

Miriam Keppler, who lead the team behind the discovery of PDS 70’s still-forming planet, explains:

“These discs around young stars are the birthplaces of planets, but so far only a handful of observations have detected hints of baby planets in them. The problem is that until now, most of these planet candidates could just have been features in the disc.”