First Observation of a Supermassive Black Hole in a Radio Galaxy

First Observation of a Supermassive Black Hole in a Radio Galaxy 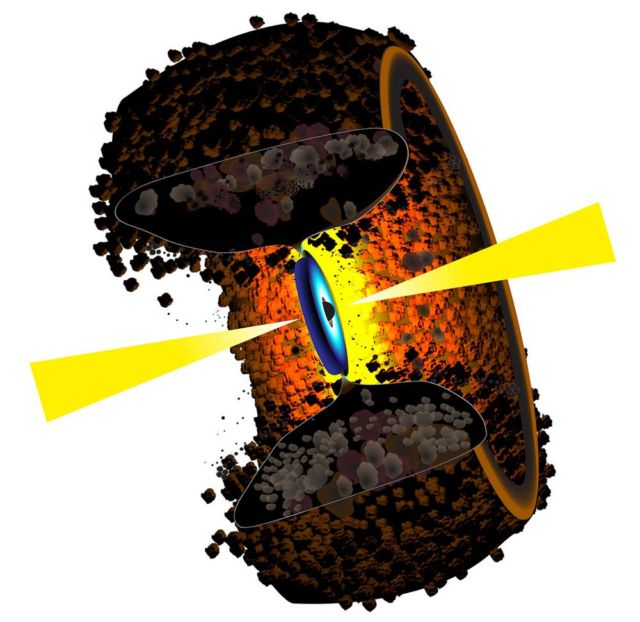 First observation of torus surrounding the supermassive black hole at the core of powerful Radio Galaxy.

Astronomers used the NSF’s Karl Jansky Very Large Array to observe the dusty, doughnut-shaped torus surrounding the black hole and accretion disk at the center of a powerful radio galaxy.

The scientists studied Cygnus A, a galaxy some 760 million light-years from Earth. The galaxy harbors a black hole at its core that is 2.5 billion times more massive than the Sun. As the black hole’s powerful gravitational pull draws in surrounding material, it also propels superfast jets of material traveling outward at nearly the speed of light, producing spectacular “lobes” of bright radio emission.

Black hole-powered “central engines” producing bright emission at various wavelengths, and jets extending far beyond the galaxy are common to many galaxies, but show different properties when observed. Those differences led to a variety of names, such as quasars, blazars, or Seyfert galaxies. To explain the differences, theorists constructed a “unified model” with a common set of features that would show different properties depending on the angle from which they are viewed.

The unified model includes the central black hole, a rotating disk of infalling material surrounding the black hole, and the jets speeding outward from the poles of the disk. In addition, to explain why the same type of object looks different when viewed from different angles, a thick, dusty, doughnut-shaped “torus” is included, surrounding the inner parts. The torus obscures some features when viewed from the side, leading to apparent differences to the observer, even for intrinsically similar objects. Astronomers generically call this common set of features an active galactic nucleus (AGN).

“The torus is an essential part of the AGN phenomenon, and evidence exists for such structures in nearby AGN of lower luminosity, but we’ve never before directly seen one in such a brightly-emitting radio galaxy,” said Chris Carilli, of the National Radio Astronomy Observatory (NRAO). “The torus helps explain why objects known by different names actually are the same thing, just observed from a different perspective,” he added.