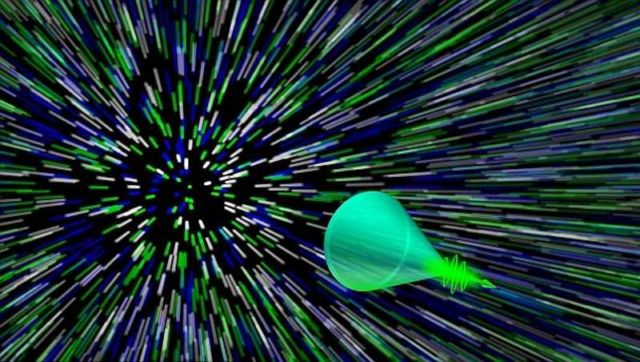 Above, a photonic Mach cone is created when an ultrafast particle gives off a shock wave, scattering the light around.  Credit Jinyang Liang and Lihong V. Wang

Until now, imaging methods have not been fast enough to catch the phenomenon in real time.

According to the scientists, ultrafast video recording of ‘spatiotemporal light distribution in a scattering medium’ will have a significant impact in biomedicine. Schematic of LLE-CUP. Lower left inset: Illustration of complementary spatial encoding for two time-sheared views. The on pixels are depicted in red for View 1 and depicted in crimson for View 2. The off pixels are depicted in black for both views. The combined mask shows that the two spatial encodings are complementary. Upper right inset: Close-up of the configuration before the streak camera’s entrance port (dashed black box).   Credit Jinyang Liang and Lihong V. Wang