Getting Oxygen from Mars’ Salty Water

Getting Oxygen from Mars’ Salty Water 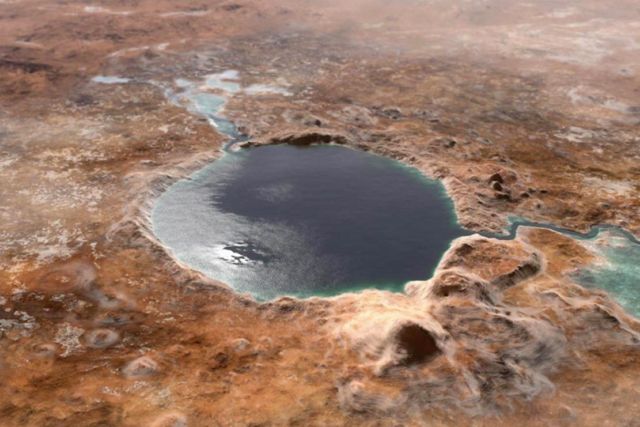 At Washington University in St. Louis, Vijay Ramani’s lab has developed a way to extract hydrogen and oxygen out of the briny water that may remain under the Martian surface.

The above illustration shows Jezero Crater — the landing site of the Mars 2020 Perseverance rover — as it may have looked billions of years ago, when it was a lake. Image NASA/JPL-Caltech

When it comes to water and Mars, there’s good news and not-so-good news. The good news: there’s water on Mars!
The not-so-good news?
The Red Planet is very cold; water that isn’t frozen is almost certainly full of salt from the Martian soil, which lowers its freezing temperature.

You can’t drink salty water, and the usual method using electricity (electrolysis) to break it down into oxygen (to breathe) and hydrogen (for fuel) requires removing the salt — a cumbersome, costly endeavor in a harsh, dangerous environment.

If oxygen and hydrogen could be directly coerced out of briny water, however, that brine electrolysis process would be much less complicated — and less expensive.

Engineers at the McKelvey School of Engineering at Washington University in St. Louis have developed a system that does just that. Their research was published today in the Proceedings of the National Academy of Sciences (PNAS).

The research team, led by Vijay Ramani, the Roma B. and Raymond H. Wittcoff Distinguished University Professor in the Department of Energy, Environmental & Chemical Engineering, didn’t simply validate its brine electrolysis system under typical terrestrial conditions; the system was examined in a simulated Martian atmosphere at -33 ⁰F (-36 ⁰C).

“Our Martian brine electrolyzer radically changes the logistical calculus of missions to Mars and beyond,” said Ramani. “This technology is equally useful on Earth where it opens up the oceans as a viable oxygen and fuel source.”