Scientists at NASA proposed a plan to make easier the terraforming of the Red Planet, by launching a giant magnetic field, to protect its atmosphere.

Astronomers have determined that Mars has been losing a significant amount of atmosphere due to the direct solar wind interaction with the exosphere, ionosphere, and upper atmosphere. This happens in part, since it no longer has a magnetic field providing an important standoff distance or buffer with the planets atmosphere. 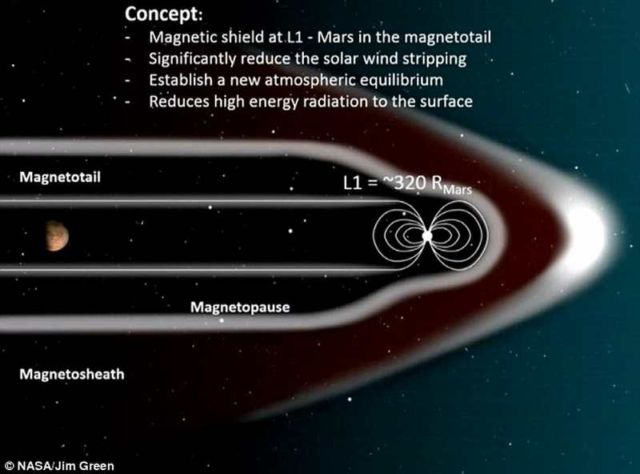 Models hosted at the Coordinated Community Modeling Center (CCMC) are used to simulate a magnetic shield, and an artificial magnetosphere, for Mars by generating a magnetic dipole field at the Mars L1 Lagrange point within an average solar wind environment. The magnetic field will be increased until the resulting magnetotail of the artificial magnetosphere encompasses the entire planet.


The exploration of Mars by human astronauts was discussed at the Planetary Science Vision 2050 Workshop, that took place in Washington, DC, on Mars 1st.

The director of the one of the more intriguing presentations, titled “A Future Mars Environment for Science and Exploration,“ Jim Green, said:

“A greatly enhanced Martian atmosphere, in both pressure and temperature, that would be enough to allow significant surface liquid water would also have a number of benefits for science and human exploration in the 2040s and beyond. Much like Earth, an enhanced atmosphere would: allow larger landed mass of equipment to the surface, shield against most cosmic and solar particle radiation, extend the ability for oxygen extraction, and provide “open air” greenhouses to exist for plant production, just to name a few.”