Glaciers are Losing a lot of Ice

Glaciers are Losing a lot of Ice 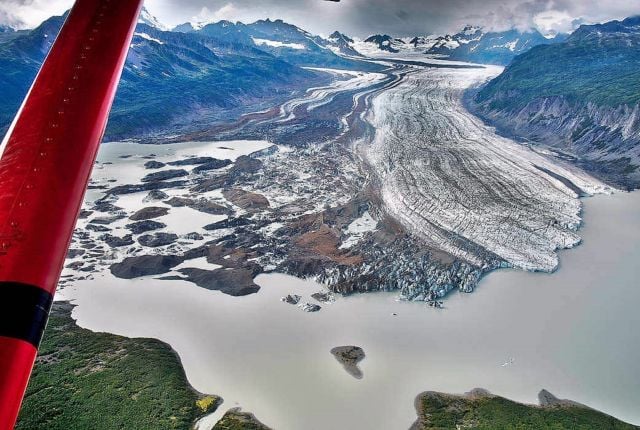 In Alaska, 5 percent of the land is covered by glaciers that are losing a lot of ice and contributing to sea level rise.

To monitor these changes, a small team of NASA-funded researchers has been flying scientific instruments on a bright red, single-engine plane since spring 2009.

Called Operation IceBridge, these airborne science campaigns have been measuring Earth’s changing glaciers and ice sheets. IceBridge was conceived to avoid a gap in measurements of ice height between two satellite missions: NASA’s Ice, Cloud, and land Elevation Satellite (ICESat), which stopped collecting data in 2009, and ICESat-2, which launched in 2018. While scientists at the Goddard Space Flight Center managed the two larger yearly field campaigns in the Arctic and Antarctica, monitoring Alaskan glaciers fell on a smaller team based at the University of Fairbanks, Alaska.

In this image, Sheridan Glacier, near Cordova, Alaska, is seen from an Operation IceBridge flight in August 2018. Sheridan is a lake-calving glacier with a rapidly disintegrating floating tongue.