How fast the Light travels through Space?

Home/Posts/SCIENCES/Astronomy, Physics/How fast the Light travels through Space?
Previous Next

How fast the Light travels through Space? 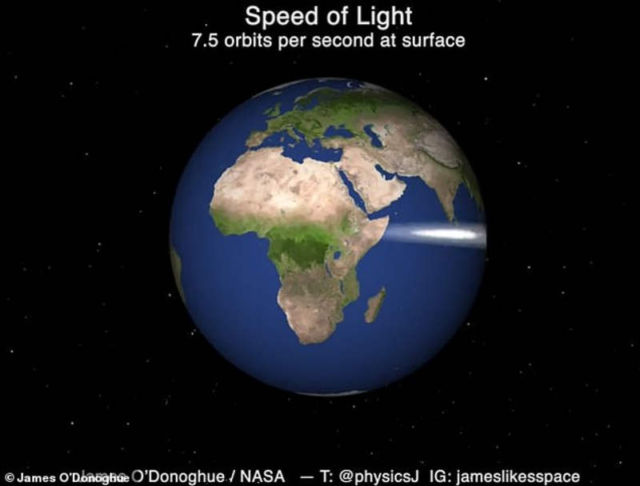 Amazing visualizations showing how fast light speed really is and how ‘slowly’ it travels through the vastness of space.

Light can travel 186,282 miles per second, 670 million mph, or orbit the earth 7.5 times every second. That’s 0.13 seconds per orbit!
It takes light to travel from Earth to Mars three minutes and two seconds.

The speed of light in vacuum, commonly denoted “c,” is a universal physical constant important in many areas of physics. Its exact value is 299792 km per second (approximately 300000 km/s (186000 mi/s)). It is exact because by international agreement a metre is defined as the length of the path traveled by light in vacuum during a time interval of ​1⁄299792458 second. According to special relativity, c is the upper limit for the speed at which conventional matter and information can travel.

Though this speed is most commonly associated with light, it is also the speed at which all massless particles and field perturbations travel in vacuum, including electromagnetic radiation and gravitational waves. Such particles and waves travel at c regardless of the motion of the source or the inertial reference frame of the observer. Particles with nonzero rest mass can approach c, but can never actually reach it. In the special and general theories of relativity, c interrelates space and time, and also appears in the famous equation of mass–energy equivalence E = mc2.