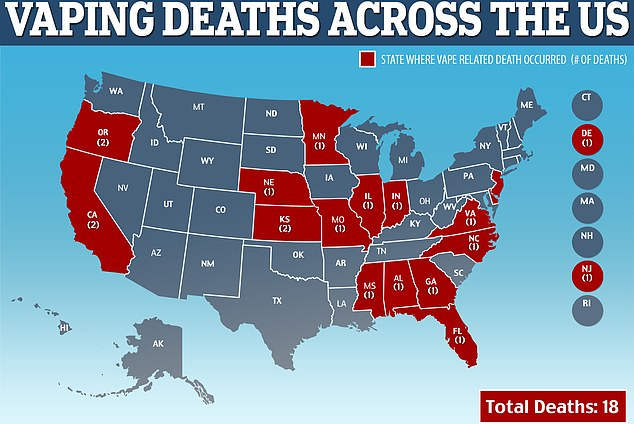 After close examination of tissue samples from vaping patients, scientists have warned of a “public health crisis.”

For the first time, a team at the Mayo Clinic found in vaping patients more serious “acute” injuries of the type commonly seen in victims of a gas attack.

Above, according to CDC, vaping-linked illnesses have led to the deaths of 18 Americans in 15 states (red).

“While we can’t discount the potential role of lipids, we have not seen anything to suggest this is a problem caused by lipid accumulation in the lungs.

Instead, it seems to be some kind of direct chemical injury, similar to what one might see with exposures to toxic chemical fumes, poisonous gases and toxic agents.”

To be honest, they look like the kind of change you would expect to see in an unfortunate worker in an industrial accident where a big barrel of toxic chemicals spills, and that person is exposed to toxic fumes and there is a chemical burn in the airways.”