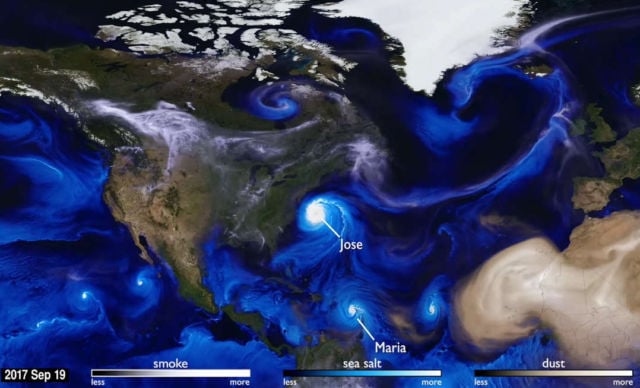 This visualization uses data from NASA satellites, combined with mathematical models in a computer simulation, to study the physical processes in our atmosphere.

How can you see the atmosphere? By tracking what is carried on the wind. Tiny aerosol particles such as smoke, dust, and sea salt are transported across the globe, making visible weather patterns and other normally invisible physical processes.

By following the sea salt that is evaporated from the ocean, you can see the storms of the 2017 hurricane season. During the same time, large fires in the Pacific Northwest released smoke into the atmosphere. Large weather patterns can transport these particles long distances: in early September, you can see a line of smoke from Oregon and Washington, down the Great Plains, through the South, and across the Atlantic to England.