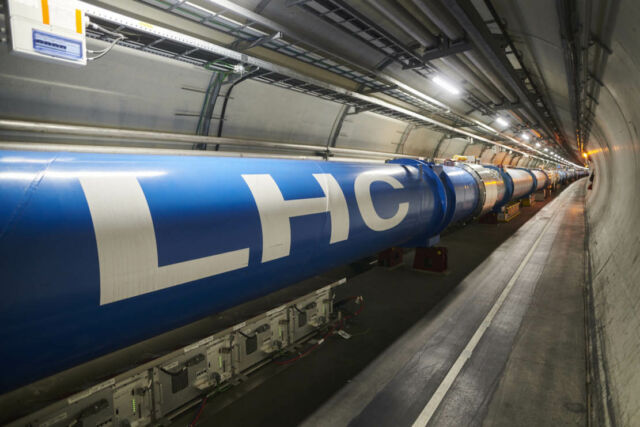 Beams of protons are again circulating around the collider’s 27-kilometre ring, marking the end of a multiple-year hiatus for upgrade work

The Large Hadron Collider has restarted after a break of more than three years for maintenance, consolidation and upgrade work. Today, 22 April, at 12:16 CEST, two beams of protons circulated in opposite directions around the Large Hadron Collider’s 27-kilometre ring at their injection energy of 450 billion electronvolts (450 GeV).

“These beams circulated at injection energy and contained a relatively small number of protons. High-intensity, high-energy collisions are a couple of months away,” says the Head of CERN’s Beams department, Rhodri Jones. “But first beams represent the successful restart of the accelerator after all the hard work of the long shutdown.”

“The machines and facilities underwent major upgrades during the second long shutdown of CERN’s accelerator complex,” says CERN’s Director for Accelerators and Technology, Mike Lamont. “The LHC itself has undergone an extensive consolidation programme and will now operate at an even higher energy and, thanks to major improvements in the injector complex, it will deliver significantly more data to the upgraded LHC experiments.”

Pilot beams circulated in the LHC for a brief period in October 2021. However, the beams that circulated today mark not only the end of the second long shutdown for the LHC but also the beginning of preparations for four years of physics-data taking, which is expected to start this summer.

Until then, LHC experts will work around the clock to progressively recommission the machine and safely ramp up the energy and intensity of the beams before delivering collisions to the experiments at a record energy of 13.6 trillion electronvolts (13.6 TeV).