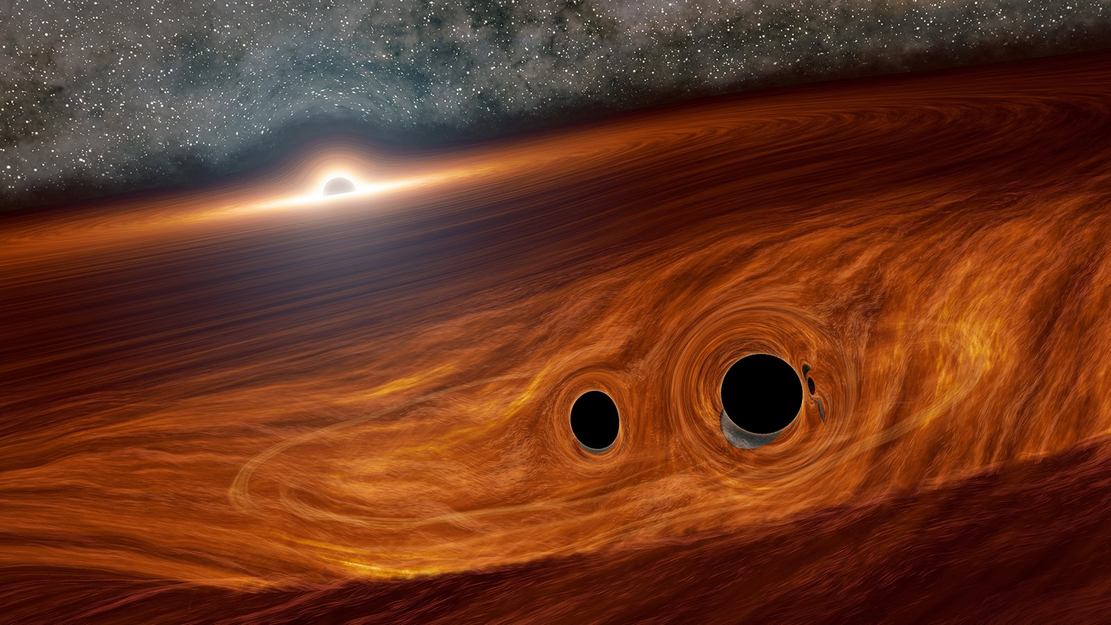 Light are seen coming out of Black Holes merge

Light are seen coming out of Black Holes merge 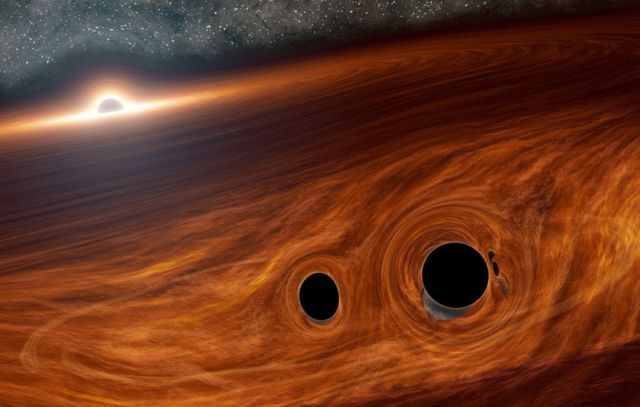 Astronomers may have seen for the first time, light from the merger of two black holes, providing opportunities to learn about these mysterious dark objects.

When two black holes spiral around each other and ultimately collide, they send out gravitational waves – ripples in space and time that can be detected with extremely sensitive instruments on Earth. Since black holes and black hole mergers are completely dark, these events are invisible to telescopes and other light-detecting instruments used by astronomers. However, theorists have come up with ideas about how a black hole merger could produce a light signal by causing nearby material to radiate.

Above: This artist’s concept shows a supermassive black hole surrounded by a disk of gas. Embedded in this disk are two smaller black holes that may have merged together to form a new black hole.  Credit: Caltech/R. Hurt (IPAC)

Now, scientists using Caltech’s Zwicky Transient Facility (ZTF) located at Palomar Observatory near San Diego may have spotted what could be just such a scenario. If confirmed, it would be the first known light flare from a pair of colliding black holes.

The ZTF results are described in a new study published in the journal Physical Review Letters. The authors hypothesize that the two partner black holes, each several dozen times more massive than the Sun, were orbiting a third, supermassive black hole that is millions of times the mass of the Sun and surrounded by a disk of gas and other material. When the two smaller black holes merged, they formed a new, larger black hole that would have experienced a kick and shot off in a random direction. According to the new study, it may have plowed through the disk of gas, causing it to light up.

Daniel Stern, coauthor of the new study and an astrophysicist at NASA’s Jet Propulsion Laboratory in Southern California, which is a division of Caltech, said:

“This detection is extremely exciting. There’s a lot we can learn about these two merging black holes and the environment they were in based on this signal that they sort of inadvertently created. So the detection by ZTF, coupled with what we can learn from the gravitational waves, opens up a new avenue to study both black hole mergers and these disks around supermassive black holes.”