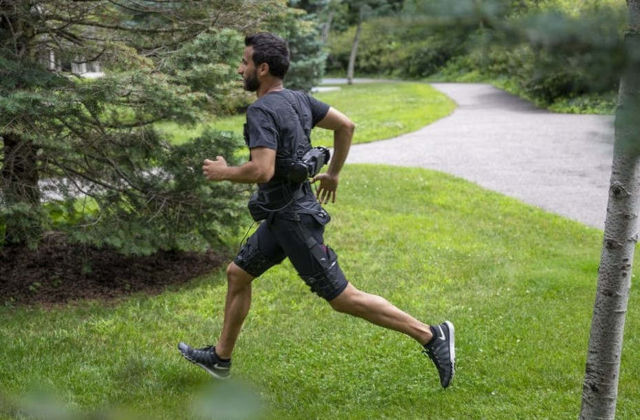 Lightweight Hip-only Soft Exosuit to assist both walking and running.

Researchers at Harvard’s Wyss Institute created a versatile, portable exosuit that assists both walking and running highlights the potential for lightweight and non-restrictive wearable robots outside the lab.

This video demonstrates the use of the hip-assisting exosuit in different natural environments, and shows how the robotic device senses changes in the gait-specific vertical movements of the center of mass during walking and running to rapidly adjust its actuation.  Credit: Wyss Institute at Harvard University

Between walking at a leisurely pace and running for your life, human gaits can cover a wide range of speeds. Typically, we choose the gait that allows us to consume the least amount of energy at a given speed. For example, at low speeds, the metabolic rate of walking is lower than that of running in a slow jog; vice versa at high speeds, the metabolic cost of running is lower than that of speed walking.

Researchers in academic and industry labs have previously developed robotic devices for rehabilitation and other areas of life that can either assist walking or running, but no untethered portable device could efficiently do both. Assisting walking and running with a single device is challenging because of the fundamentally different biomechanics of the two gaits. However, both gaits have in common an extension of the hip joint, which starts around the time when the foot comes in contact with the ground and requires considerable energy for propelling the body forward.