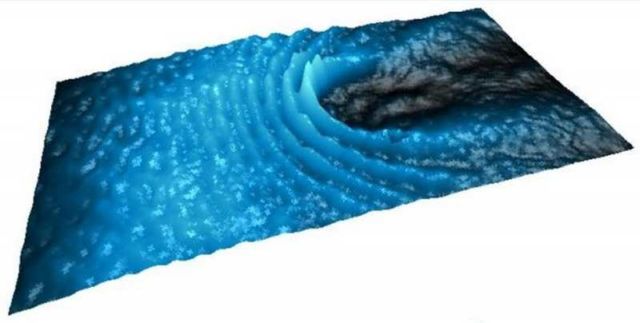 The “liquid” properties of light emerge under special circumstances, when the photons that form the light wave are able to interact with each other.

Scientists have known for centuries that light is composed of waves. The fact that light can also behave as a liquid, like the current of a river, is a much more recent finding that is still a subject of active research.

Researchers from CNR NANOTEC of Lecce in Italy, in collaboration with Polytechnique Montreal in Canada have shown that for light “dressed” with electrons, an even more dramatic effect occurs.

Light become superfluid, showing frictionless flow when flowing across an obstacle and reconnecting behind it without any ripples.

The flow of polaritons encounters an obstacle in the supersonic (top image) and superfluid (bottom) regime.  Credit Polytechnique Montreal

“Superfluidity is an impressive effect, normally observed only at temperatures close to absolute zero (-273 degrees Celsius), such as in liquid Helium and ultracold atomic gasses. The extraordinary observation in our work is that we have demonstrated that superfluidity can also occur at room-temperature, under ambient conditions, using light-matter particles called polaritons.

Superfluidity, which allows a fluid in the absence of viscosity to literally leak out of its container, is linked to the ability of all the particles to condense in a state called a Bose-Einstein condensate, also known as the fifth state of matter, in which particles behave like a single macroscopic wave, oscillating all at the same frequency.”