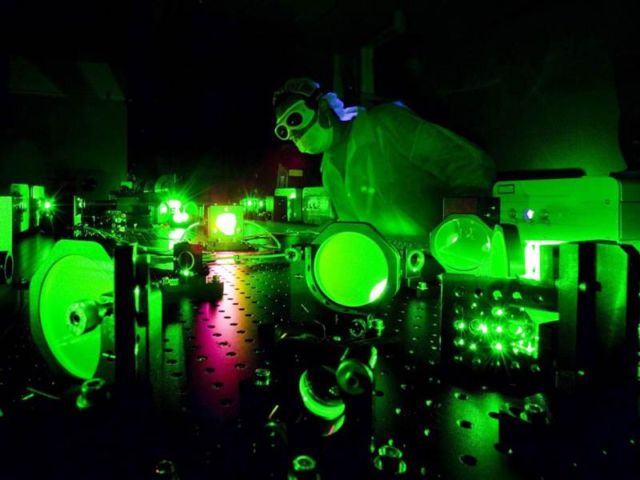 Scientists create brightest light ever, at the brightness of a billion suns.

Donald Umstadter and colleagues at the University of Nebraska-Lincoln, created the brightest light ever produced, shining as bright as a billion of our Suns.

The Extreme Light Laboratory is home to Diocles. Sitting within a 15-by-15 foot square space, this small but powerful laser produces as much energy as 100,000 Hoover Dams, all within the time frame of 30 billionths of one millionth of a second, aka 25 femtoseconds.

Above, a scientist at work in the Extreme Light Laboratory at the University of Nebraska-Lincoln.

Diocles produces pressure greater than that within the core of the sun. This process allows laboratory director Donald Umstadter and his team to study conditions found only at the horizons of black holes or inside exploding supernovas. Nebraska scientists are answering big science questions within the space of a small lab.

“So it’s as if things appear differently as you turn up the brightness of the light, which is not something you normally would experience. An object normally becomes brighter, but otherwise, it looks just like it did with a lower light level. But here, the light is changing (the object’s) appearance. The light’s coming off at different angles, with different colors, depending on how bright it is.”

Small size and high power also mean Diocles can enable new technologies and applications never before possible. Diocles can potentially produce x-rays that can “see through” four-inch-thick steel to detect bombs hidden in a cargo container, or hairline cracks in a jet turbine. The laser is small and inexpensive enough for hospitals to potentially use it as a proton source for cutting-edge cancer therapy.